Exploring the Wild Turkey range is a lot like life – never dull and full of surprises. Take, for example, the opportunity to sip early 1970’s WT KSBW. Regardless of the age of the bourbon itself, we’re talking about something that was bottled over 40 years ago. That’s undeniably a nice surprise, and I’m very thankful I have the opportunity to review this whiskey. 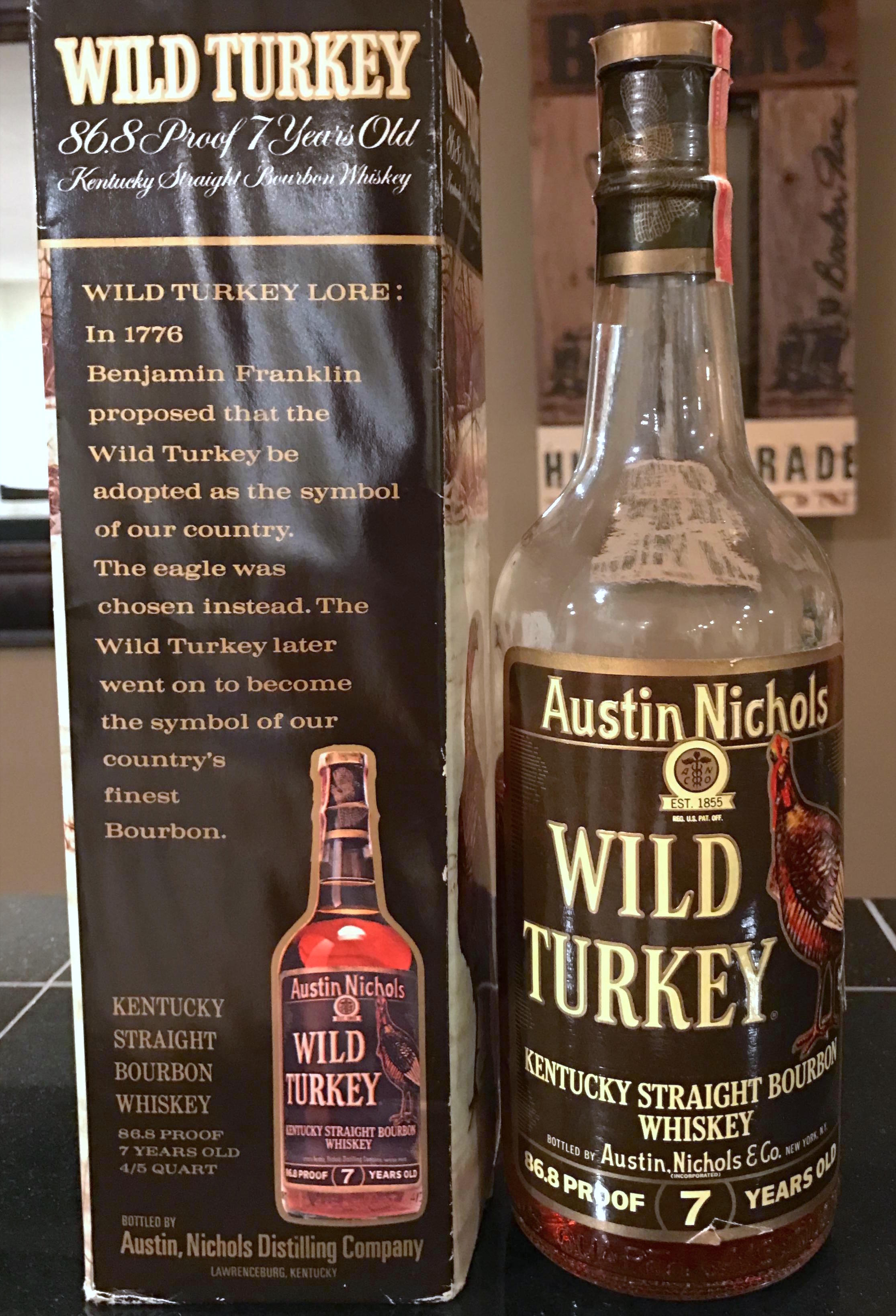 From what research I can gather, 86.8-proof “brown label” Wild Turkey KSBW was produced from the early 1970’s to the mid-1980’s. The only major difference I can find between 70’s and 80’s releases are an age statement, with the earlier bottles stating “7 years old.” If you’re familiar with my Wild Turkey reviews, you know that I’ve discussed Wild Turkey’s past as a NDP (non-distiller producer) and that any bottle filled prior to 1981 (based on recent statements by Eddie Russell) has the potential to contain sourced whiskey. Some Turkey fans have a hard time accepting this, but until Jimmy Russell clarifies, we have to acknowledge this possibility. As for now, all we can do is trust our palates.

So, back to the 70’s … not too long ago I reviewed 1976 Wild Turkey 101 and was pleasantly surprised to find it tasted very similar to 1981 WT 101 (my favorite WT 101/8 to-date). Both of those whiskeys were complex, balanced, and loaded with mature dusty character and glut era Turkey “funk” – solid A-level sippers in every way. So now it’s time to see how 1972 Wild Turkey compares. Sure, it’s a lower proof and carries a younger age statement than 101/8, but based on the color alone it’s either older than seven years or minimally diluted (barrels proofing-down was an issue for WT for many years). But of course, the real question is – will it taste like Wild Turkey?

Overall: As mentioned in my introduction, Wild Turkey can surprise you and this one certainly did. Based on my previous experience with 1976 WT 101/8, I was expecting a whiskey saturated with dusty bottle notes. Not the case with this one. It is, however, an excellent example of core bourbon notes being showcased full-strength at a lower proof. I’m getting very little, if any, “funk” (damp mustiness, herbal/floral) that’s usually prevalent in older WT bottles. But don’t get me wrong – just because it doesn’t taste like typical dusty Wild Turkey doesn’t mean it’s not good Wild Turkey. In fact, it’s quite delicious. Imagine all of the flavor of Russell’s Reserve Single Barrel at 86.8 proof. That’s the profile I’m getting – more classic/modern. There’s enjoyable complexity for the proof (likely very little dilution), it drinks its age, and nothing is out of balance.

In closing, this experience has been eye-opening. One would think with such an old bottle (over four decades), dusty notes should be easily found. It’s making me think that bottle conditioning may not be as large a factor as I’ve considered it in the past. Maybe older Wild Turkey 101/8’s have significantly older whiskey in the batches and this 7-year really isn’t much older than seven years? Or, maybe this 1972 WT KSBW wasn’t distilled at Boulevard, but distilled elsewhere in Kentucky and acquired by Austin, Nichols? Or, maybe it’s a batch containing both sourced and Boulevard-distilled KSBW? I’m really not sure and Jimmy’s not talking. The bottom line is – if you’re looking for dusty profile Wild Turkey, there are no guarantees when it comes to the 1970’s (or earlier).