Before I begin I’d like to offer a most sincere thanks to the individuals that made this review possible.  I’ve been wanting to try dusty Wild Turkey 101 Rye for quite some time now.  As you’ll soon read in this post, it’s not something easily found – at least not near as easily as dusty Wild Turkey bourbon expressions.  Fellas, thank you.  You’ve helped me check a longstanding empty box on my Wild Turkey bucket list and I couldn’t be happier for it.

One more thing before we get rolling here.  This review may ruffle a few Turkey feathers.  Dusty Wild Turkey is apparently holy ground for some enthusiasts out there.  Don’t get me wrong – there are several dusty/classic Wild Turkey expressions that are quite frankly hard-matched by today’s whiskey expressions (from any distillery).  And then there are some that command sizeable premiums on secondary markets and I’m left scratching my head.  What matters most is how something tastes to you and you alone.  Please note that when I write these reviews – like it or not – you’re getting my honest and unfiltered opinion.  I’m in no way an authority and you should always try things for yourself.

The history of Wild Turkey rye is mysterious at best.  I’ve touched on this briefly in past posts, but based on the subject of today’s review I think it’s important I mention some key points again.  So what do we know?  Well, we know that Wild Turkey 101 Rye (then called Wild Turkey Straight Rye) began production sometime between 1942-1952.  At that time it was distilled in Maryland by Baltimore Pure Rye.  The actual mash bill remains unknown, but the whiskey was eight years of age and 101 proof (sound familiar?).

Sometime in the 1960’s Austin, Nichols & Co. began sourcing Wild Turkey 101 Rye from Michter’s/Pennco in Pennsylvania.  I’ve been able to confirm through Dick Stoll, master distiller of Michter’s at that time, that the mash bill was 65% rye, 23% corn, and 12% barley (special thanks to Chuck Cowdery for the lead).  As a side note, the Stolls were wonderful to chat with and I recommend everyone take a look at their latest venture, Stoll & Wolfe Distillery, which is now producing authentic Pennsylvania Rye.

By 1967 Jimmy Russell had the Boulevard Distillery running like a well-oiled machine.  He was officially named Master Distiller, though I’d argue those responsibilities realistically started closer to day-one in 1954.  Now, Jimmy will tell you very quickly that rye whiskey was, is, and will always be a fad.  He is a bourbon man after all.  Whether he decided himself to take on Wild Turkey Rye production, or whether the folks at Austin, Nichols placed it on him are details I’m honestly not sure of.  But what matters most is that distillation was moved to Kentucky in the mid-1970’s.  When it was moved, Jimmy changed the recipe to what we reportedly have now: 52% rye, 36% corn, 12% corn.  My source on this mash bill is Bourbonr, as Jimmy ain’t talking. 😉 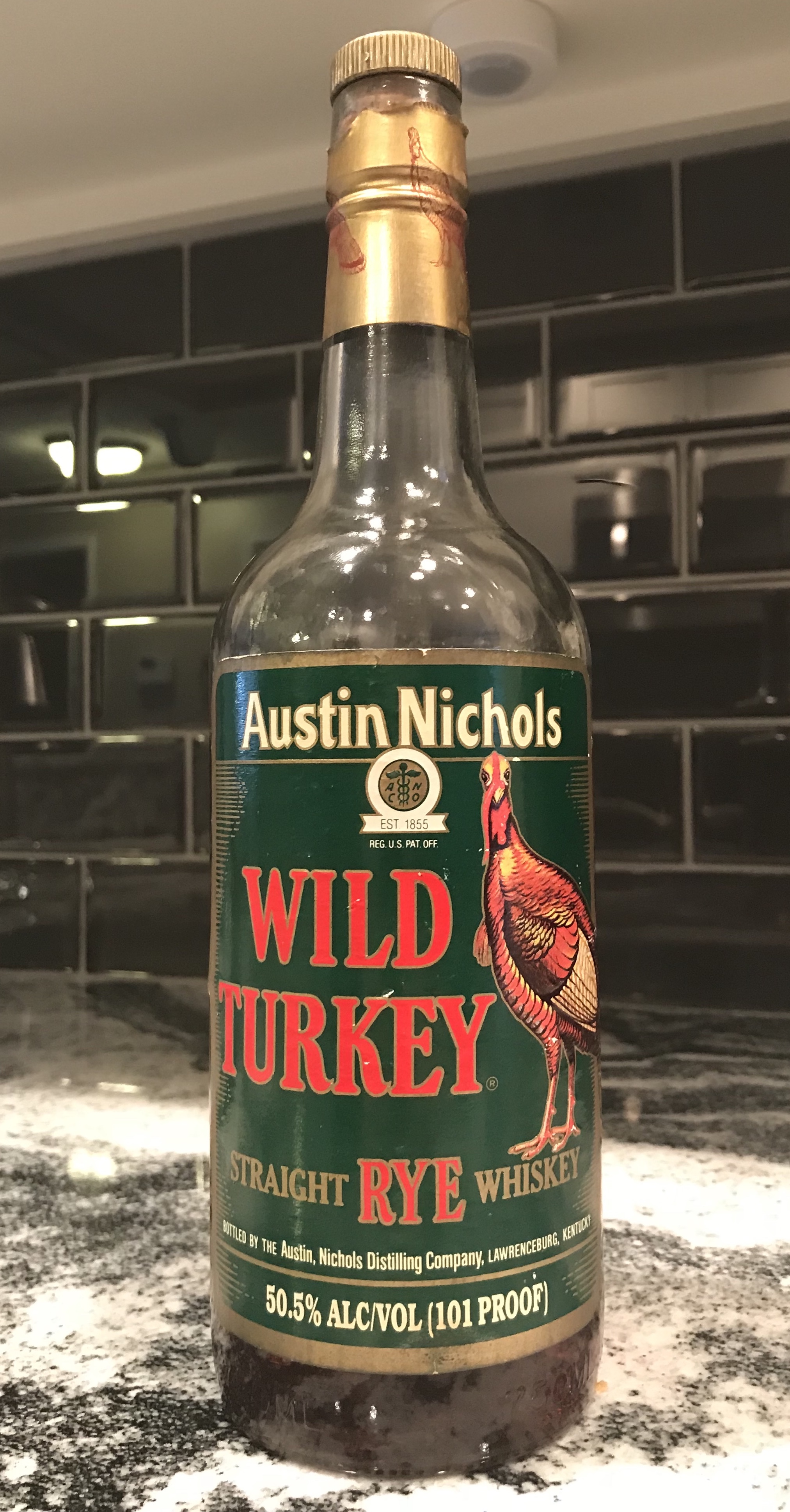 From my understanding, about the time the Lawrenceburg-distilled Wild Turkey 101 Rye hit the shelves (about 1980) the label changed from the standard WT 101 label, to a brilliant and contrasting green and red colored label.  It became known among whiskey drinkers as “Christmas Rye,” primarily because of the label colors, though it may also have a little to do with rye being a common holiday favorite.  Today, dusty Wild Turkey 101 Christmas Rye bottles are highly sought-after and command a significant premium (regardless of year) on secondary markets.  I’ve always wanted to try it, and thankfully today is the big day.

Overall:  Well, this is without doubt a great whiskey.  I don’t think I’ve ever experienced so much funky fruit in a Wild Turkey expression.  Possibly the 1979 WT 101 8-year bourbon I tasted back in September, though it had a notable minerality on the nose and palate.  Perhaps it’s best if I break down each tasting phase for this ‘90 Christmas Rye and give you a better picture of what this whiskey is all about.  It’s a unique pour, yet at the same time it’s not.  I’ll do my best to explain.

The first thing that strikes me as I nose this whiskey is its similarity to dusty Wild Turkey 101/8 KSBW.  It’s definitely not the profile one associates with modern Wild Turkey rye expressions.  In fact, if this were given to me blind I would’ve likely assumed it was late-70’s WT 101/8 bourbon.  There’s a lot of red fruit here, primarily cherry and candy apple.  Plenty of dusty funk and classic Wild Turkey honey-maple present as well.  All in all, very nice but nothing too far from other dusty Turkey expressions – at least nothing that screams rye whiskey.

Things really start to mellow out when this Christmas Rye hits the palate.  Now don’t get me wrong (and this is probably the part where I start ruffling Turkey feathers) – it’s tasty – it’s just not what I expect from a straight rye whiskey.  There’s sweets for days – fruity vanilla, caramel apple, even a touch of cherry soda – but no mint, zest, or dill (at least I’m not getting any).  There is, however, a pinch of herbal spice, but nothing more than you’d find in most Wild Turkey KSBW expressions from that time.  In fact, early to mid-90’s Rare Breed and 1855 releases are notably spicier.

And finally, the finish.  This is hands-down the best feature of this Christmas Rye and almost (almost) worth the price of admission were it valued more reasonably.  It’s quite long – not long in warmth, but rather in balanced flavor.  While still rich with red fruit, this is where the classic Wild Turkey baking spice makes its triumphant return along with waves of slowly diminishing lemon peel, ginger, and pepper.  In some ways reminiscent of Four Roses OBSO single barrel selections, with their signature spicy-fruity fade away.  A welcome and fantastic surprise given the initial sweet and easy taste.

What a fun pour!  I’m so happy I had the opportunity to sip this highly elusive Wild Turkey 101 Rye.  Sure, it’s just one year’s release.  There may be better bottles of Christmas Rye out there (probably are), but based on my experience with this one I simply can’t justify its secondary value.  Yes, they’re rare bottles – much rarer than dusty WT 101/8 bourbon releases from the same era.  And there’s something to be said about rarity – BUT – there’s also something to be said about satisfaction.  When it comes to rye, I like a little kick in the taste buds – a twist, if you will.  I like to know I’m sipping rye whiskey.  While this Christmas Rye is packed with fruity flavor and sips well under its 101 proof, if you’re looking for rye bite, nobody’s home.

In closing, I feel it’s important to remind everyone that my opinion is just that – my own.  I can give you a snapshot of my experience, but it’s important you try things for yourself.  It’s possible that Wild Turkey 101 Christmas Rye releases are worth every penny (and then some) to plenty of folks out there.  I don’t fault them for it and I get it – it’s an excellent pour.  As for me, however, I’d happily take a box of assorted Russell’s Reserve Single Barrel Rye bottles in exchange.  That’s right – I find greater rye complexity and profile balance in the modern Wild Turkey single barrel rye expression.  I’ll concede it lacks the dusty traits, but if that’s all I’m missing out on, I’ll gladly take the gains of a bolder and spicier whiskey.