If there’s one thing I hear time and time again from Wild Turkey fans, it’s “bring back the 8-year 101.”  I get it.  Age statements are wonderful things.  They tell you a lot about what you’re sipping and back it with math.  Not only do you have the assurance of a defined maturation, you have a firm statement of confidence and pride.  It’s as if the distillery is personally telling you, “we waited no less than eight years to offer you this whiskey.”  And that means something.

Again, I get it.  But here’s the thing – we now live in a non-age-stated (NAS) world of bourbon whiskey.  Jim Beam Black 8-year and Basil Hayden’s 8-year … no longer age-stated.  Elijah Craig 12-year and Fighting Cock 6-year … NAS. Weller Special Reserve 7-year and Old Charter 8-year … again, NAS.  The list goes on.  But this isn’t a new trend.  The bourbon industry has been dropping age statements since the post-Glut Era and I don’t see them coming back to standard offerings for years to come.  The best thing left to do – the only thing left to do is to judge our whiskey by taste.  After all, it’s the taste that matters most.

And so I have before me (thanks to an incredible whiskey friend) a 2017 Wild Turkey 101 8-year Kentucky straight bourbon whiskey.  Some of you may be scratching your heads.  An 8-year age statement on a modern Wild Turkey 101 bottle?  That’s right.  You see, the 8-year age statement never ceased for export bottles destined for Japan. It only ceased domestically and later in certain Euro markets. 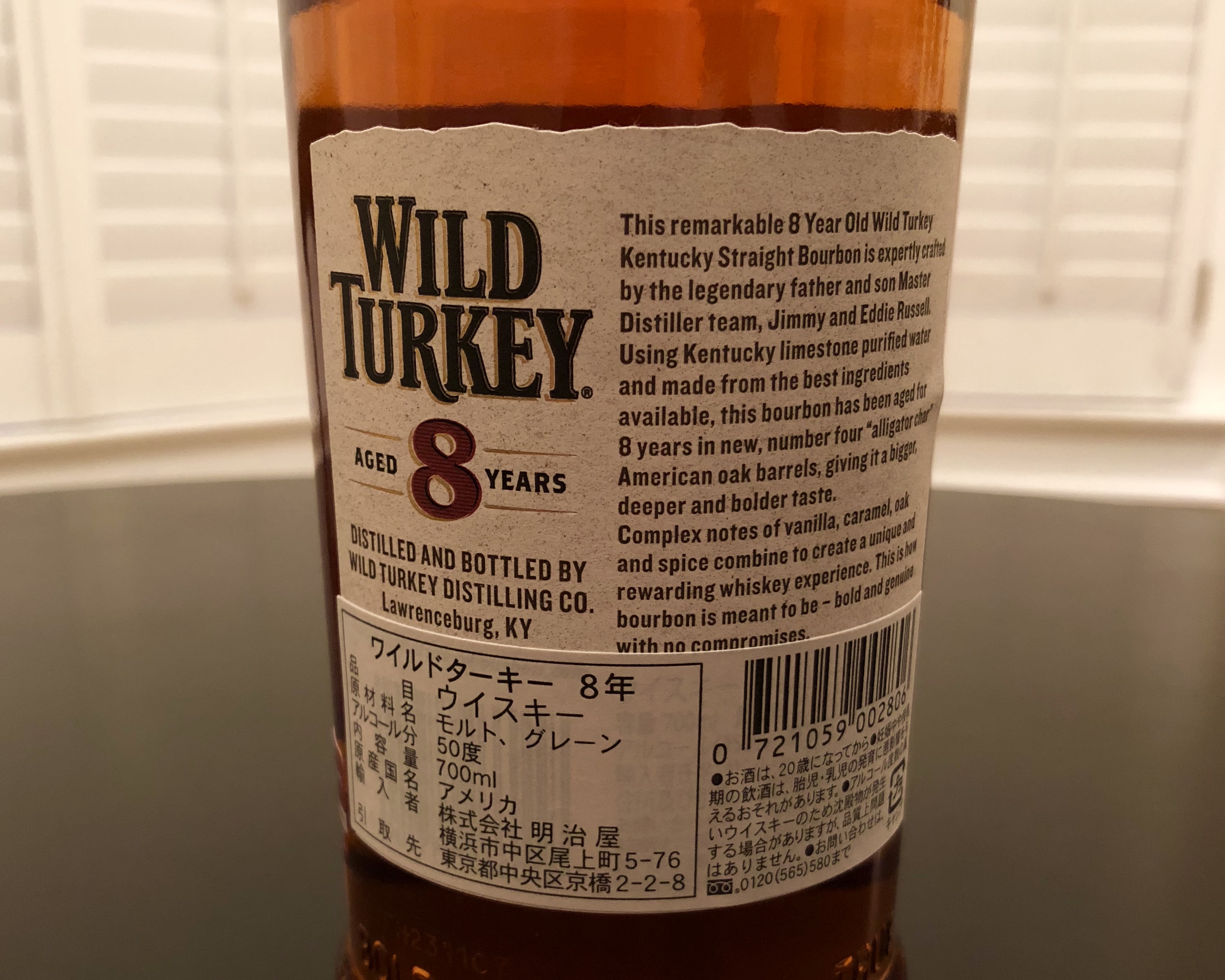 This is typically the time when folks start pressing the “What about America?” button.  Sure, Japan has the 8-year and the 13-year, but don’t get all “riled up” just yet.  We have it so much better in the States.  For example, how many Russell’s Reserve Single Barrel or Kentucky Spirit private selections can you find overseas?  How about Russell’s Reserve Single Barrel Rye selects (or single-barrel KSRW in general)?  And if you still think we have it bad, talk to our brothers and sisters in Australia.  You’d have to go on a walkabout if you found out how much they pay for the limited selection they have.  Even our ABC control states have it better.

So let’s put all this in perspective.  We may not have an age statement on our Wild Turkey 101 (please don’t hijack my post Wade Woodard 😉 ), but we do have a literal ton of it available at our will.  Minis, half pints, pints, fifths, travel fifths, liters, handles – hell, there’s probably three more I’m forgetting.  Wild Turkey 101 is everywhere in America.  We’re swimming in it.  So let’s stop for a second and be thankful for that.  It also remains a quality pour at a quality price.  Yet another thing to be thankful for.

Overall:  This is a damn solid bourbon.  Is it notably better than 2017 NAS Wild Turkey 101?  Interestingly, not really.  While it’s certainly no let down, it doesn’t blow me away with “next-level” complexity or unexpected intensity either.  The core notes are very much in line with the 101 you find at your local and quite comparable to one another when tasted side by side.  Arguably, the 8-year 101 has a touch of finesse, rounding off an edge or two on the nose and palate, but it’s nothing vividly apparent or striking.  One might even attribute such minor differences to simple batch variance.

At the end of the day modern Wild Turkey 101 8-year is a nice bottle to have around, but then so is domestic Wild Turkey 101 – especially the 2017 bottles I’ve had recently.  If one must hang their hat on an age statement, there’s always Russell’s Reserve 10-year or private selections with disclosed maturations.  While modern Wild Turkey export expressions are always fascinating to explore, I don’t think anyone needs to spend significant resources acquiring them.  Personally, I can find everything I need with a quick trip down the street.  And that’s the beauty of Wild Turkey 101.  Age statement or not, it’s still the reigning everyman’s quality straight bourbon whiskey.  Thank you for that, Mr. Russell.