Thanks to a West Coast whiskey associate, I was able to obtain a sample of Wild Turkey Beyond Duplication, more specifically, a 1989 export bottle of Beyond Duplication (gold foil top). One of the best things about the whiskey enthusiast community is sharing. And sharing old, dusty Wild Turkey … well, that’s priceless. 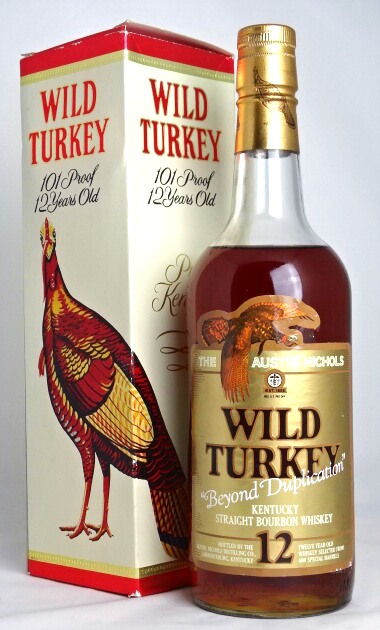 Brief history lesson: Beyond Duplication was the first of several twelve-year special releases by Austin, Nichols/Wild Turkey, beginning in the early 1980s. Sometime in the mid 1980s, Beyond Duplication was replaced with the now famous and highly sought-after “Cheesy Gold Foil” (a.k.a. “CGF”) twelve-year label. A few years down the road in the mid-1990s, CGF was eventually replaced by the “Split Label” twelve-year, which would be the last of the special twelve-year releases distributed in the United States.

The export market, however, was different. Beyond Duplication continued to be released in foreign countries (primarily Japan) while CGF was in regular U.S. distribution. A few years down the road, CGF continued to be released overseas while the “Split Label” was in domestic production. Additionally, the export market had the privilege of seeing twelve-year Wild Turkey 101 releases all the way up until the early 2010s.

It can become rather confusing, but the important thing to know is this: Any twelve-year Wild Turkey 101 released in any market from the early 1980s to the early 2010s is a top-quality pour – period. Some are better than others (the general rule is the earlier the release, the better), but again – all are top-quality pours.

Overall: Well, it really doesn’t get much better than this – fantastically tasty, complicated, and well balanced. I’m sure there are a few other American whiskeys out there that could rise to the challenge, but the list is most definitely short.

As for how export Wild Turkey Beyond Duplication compares to the legendary Wild Turkey “Cheesy Gold Foil” – well, they’re almost indistinguishable in profile. In fact, I believe the late 1980’s export Beyond Duplication is the same exact same bourbon as the late 1980’s American CGF. It’s just two different labels. I don’t have hard evidence for this, but I honestly don’t see why Wild Turkey would have two entirely different stocks of twelve-year KSBW bottled within the same timeframe.