The history of Wild Turkey 101 12-year traces back to about 1980 with the release of Beyond Duplication.  Around 1985, the domestic market saw the 101/12 label redesigned to what’s now universally known as “Cheesy Gold Foil,” or “CGF” for short.  In contrast, the export market continued with the Beyond Duplication label for at least four more years.  In 1992 the domestic 101/12 label changed from CGF to the “Split Label” design (so named for its front label that’s literally split into two sections), while foreign bottles continued with the CGF label into the mid-1990’s.

By 1999, domestic distribution ceased for Wild Turkey 101 12-year.  The export market, however, flourished with 12-year Wild Turkey for another 13 years.  In that time three export-only labels were issued: “Pseudo-Split Label” (abt. 1999-2005), “Uni-label” (abt. 2005-2011), and the monochrome label based on the 2011-2014 Campari mass redesign for all Wild Turkey core expressions.  Similar to domestic NAS and export 8-year Wild Turkey 101, profiles varied by year and batch, and subsequently moved from more of a dusty-based profile to that of a robust classic profile.  Regardless of label, nearly all 12-year WT 101 bottles were (and remain) top-quality pours.

But as the saying goes, all good things must come to an end.  Wild Turkey is no exception. By 2013, Wild Turkey 101 12-year was discontinued worldwide.  While plenty of bottles remained in the foreign marketplace in the years immediately following, it didn’t take long for the global bourbon community to move from Stitzel-Weller hunts, to Wild Turkey hunts.  Finding any Wild Turkey 101/12 label at retail nowadays is highly unlikely.  That said, 101/12 bottles of all labels can be found on secondary markets.  You just have to spend a little time searching and accept that pricing will be far from standard retail.  Or you could just fly to Japan and hope to get lucky. 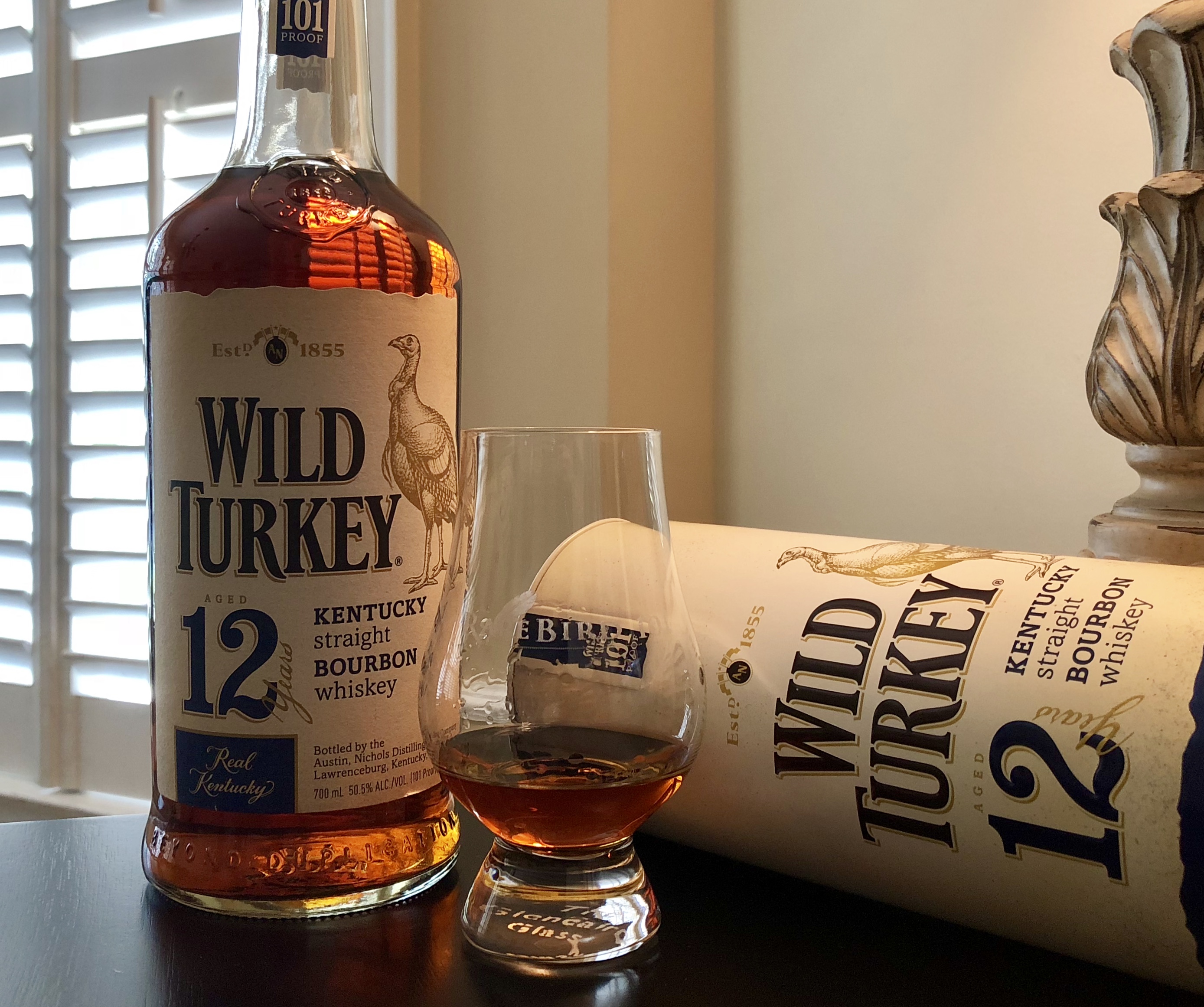 And that brings me to the focus of today’s review.  Thanks to a very generous friend that travels abroad, I have a Japanese “monochrome bird” or transitional label Wild Turkey 101 12-year to enjoy (and spoiler – I have been).  It’s dated September 24, 2012 (by laser code), so it’s very likely one of the last (if not the last) batch of Wild Turkey 101 12-year.  I’ve always been curious about this particular label.  I’ve reviewed several 101/12 releases, but never an early 2010’s bottle.  The day has finally come and should prove interesting at the very least.  With 101/12 being a personal favorite, I honestly don’t think I have much to worry about.  But let’s skip the assumptions and have a healthy pour just to make certain. 😉

Overall:  If you’re looking for dusty profile Wild Turkey 12-year, such as the likes of CGF or Split Label, you’re not really going to find it here.  That said, it’s a hands-down incredible pour – a near-perfect representation of the classic Wild Turkey profile with a touch of modern Turkey for good measure.  In many ways it reminds me of Russell’s Reserve 2002, yet sweeter and more refined.  I’d even go so far as to say that this 101/12 has a nicer finish, as there’s no dry or astringent oak notes like I find laced in 2002.

As I blissfully sip this Wild Turkey 101 12-year, I can’t help but wonder why we no longer see this on the market – export or domestic.  Sure, there was a period of time when stocks were likely low, a direct result of the bourbon boom that started in the late 2000’s, but it’s now 2018.  Production has steadily increased and there’s more Wild Turkey barrels and rickhouses than ever before.

While I appreciate the creativity and experimentation recently displayed by Master Distiller Eddie Russell (really, I do), I’d happily sacrifice a little of that (just a little) to see Wild Turkey 101/12 back on retail shelves again.  It wouldn’t have to be a regular release either.  As Bobby Childs from Adventures in Whiskey recently remarked, once a year, maybe around Christmas.

Personally, I think an annual release would be perfect. Hell, give the CGF or Split Label design fresh takes and you’d probably have an even hotter item.  But speaking truthfully, you could fill a cheap plastic travel bottle with 101/12 and I’d buy it without hesitation (at a premium, no less).

Ah yes, a retail shelf lined with Wild Turkey 101 12-year would be so very nice, but alas I must pinch myself.  The more time I spend on this blog the more I understand how this industry really works.  There’s us, there’s the distillery, and there’s corporate.  While I’d like to agree with Meat Loaf in thinking two out of three ain’t bad, in this business, when it comes to what consumers actually want, it’s three out of three or zilch.