Looking back over the last three years at the Master’s Keep series, there’s been ups and downs – two hits and a single export-only miss (1894).  Some enthusiasts have appreciated the series more than others, but as a whole I consider it a successful run.  Truth be told, we owe it all to Eddie Russell.  While Jimmy will always be a legend of legends, Eddie has more than proven his worth as a master distiller.  From Russell’s Reserve Single Barrel (bourbon and rye), to an incredibly popular private barrel program, the Master’s Keep releases are icing on an already impressive cake.  And the latest in the Master’s Keep lineup, Revival, is arguably one for the bourbon history books.

In 2004, Wild Turkey released Sherry Signature, a ten-year, 86-proof bourbon finished in Oloroso Sherry casks and “enhanced” with Oloroso Sherry as well.  I’m not certain what enhanced means entirely, but I’m guessing a small amount of sherry wine was added to each batch.  It was an export-only release which saw considerable distribution in Europe (likely based on the popularity of sherry-finished Scotch).  I’ve yet to taste Sherry Signature, but it obviously made an impression on Eddie Russell, as recalled on the liner notes of Revival’s box:

Master’s Keep Revival is the whiskey that Master Distiller Eddie Russell has dreamed of for decades.  Years ago, Eddie’s legendary father, Master Distiller Jimmy Russell, crafted an experimental bourbon enhanced with Oloroso Sherry that faded from existence but not from Eddie’s mind.  Now Eddie presents a stunning revival of that special bourbon – a mouthwatering memory, perfected and bottled.

For 12 to 15 years, the bourbon in this limited edition rested in a reserved lot of American Oak Barrels before finishing in 20 year old Spanish Oloroso Sherry casks that Eddie personally hand-selected during his travels to the Jerez-Xeres-Sherry region in Spain.  The final result is an indulgent sipping whiskey with the warm and round characteristics of the Spanish Sherry, anchored perfectly by the backbone of a beautifully crafted bourbon.

While some may be surprised that Eddie would take on a sherry-finished whiskey, it doesn’t surprise me at all.  From the moment Eddie began playing a larger role at Wild Turkey, he made it very clear that his tastes weren’t necessarily Jimmy’s.  Eddie has long been an advocate of experimentation (within reason); we’ve seen it twice already.  Forgiven, while not a personal favorite, is one such example.  More recently, Longbranch offered a new spin on traditional Wild Turkey bourbon.  Again, not a personal favorite but I appreciate his willingness to try different things.  That takes skill, and arguably, courage.  After all, in the case of Revival you’re risking choice twelve-year stocks and an investment in Spanish ex-sherry casks (which can’t be cheap to import).  “Messing up” isn’t really an option.

Before I get to the tasting, I’d like to briefly remark on the packaging.  Even though Revival shares the same basic box and bottle design as the other Master’s Keep releases, the red faux-woodgrain box really catches the eye; it draws you in and looks fantastic on display.  The burgundy neck strip adds a classy touch, as does the name itself … Revival.  It’s a fitting title for the domestic return of Wild Turkey 101 Twelve-Year, as well as the rebirth of a mid-2000’s sought-after rarity.  It’s an enticing presentation and in some ways helps one justify the ultra-premium price tag ($150 SRP). 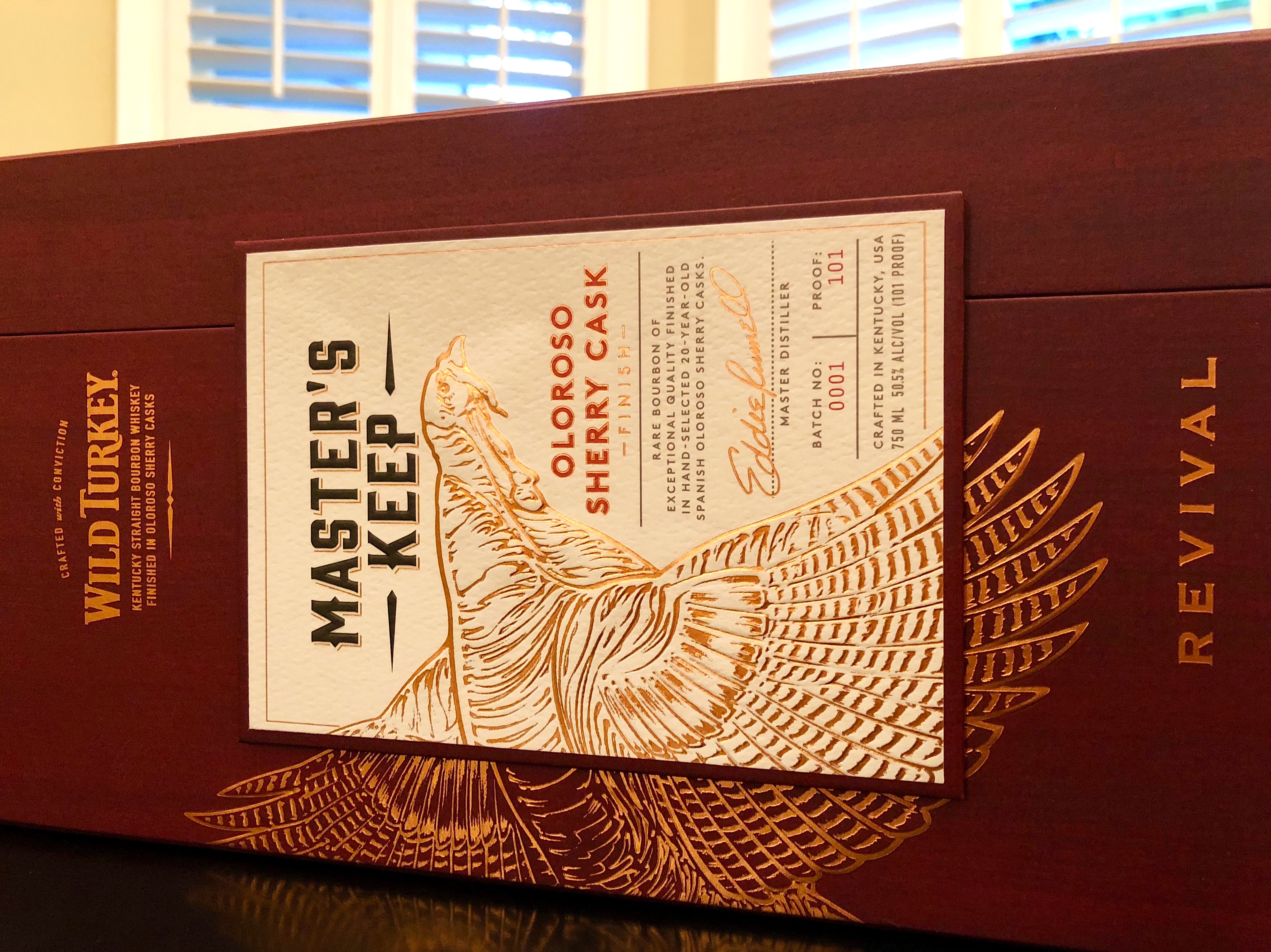 As I pour this whiskey I can’t help but feel a bit nervous for Eddie.  With so many Wild Turkey fans awaiting the return of a 101/12 expression, bringing it back as a finished offering could very well backfire.  Not everyone is a fan of finished American whiskeys and the traditional Wild Turkey fan base isn’t typically the experimental-loving bunch. They’re hard-working folks that appreciate a quality pour at a quality price.  Paying for an expensive Wild Turkey expression for special occasions is one thing, but taking that risk on an experimental version is another.  But here’s the good news – I know how this story ends.

Those familiar with my reviews know that just because I write in present tense, doesn’t mean I haven’t spent plenty of time with a pour beforehand.  In fact, patrons get early insight into all of my first pours – this one in particular was extremely fun to share last week.  Special thanks to Ryan Alves for posting his thoughts on Revival, especially the nod to his grandfather.  It’s a beautiful thing when a whiskey transports you back in time to a memory or remembrance of a loved one.  At that point it transcends ratings and criticism.  It’s what a master distiller likely wants most – a whiskey that you’ll cherish far more than taste alone.

I have a lot to say about Revival, but few things as important as that last sentence.  I’ll enjoy this pour and try to give you an idea of what you’ll experience, but needless to say – it’s something far greater than tasting notes or critical impressions.

Overall:  There is beauty in this glass.  Marvelous, really.  Master’s Keep Revival is hands down the best sherry-finished straight bourbon whiskey I’ve ever had and I don’t mean that lightly.  Throughout each phase of tasting, this whiskey excels at intricacy and balance.  From an enchanting nose to a lingering finish, each breath, sip, and exhale is cause for pause.  Whereas many whiskeys (particularly bourbons) tend to follow what I call the “A, B, C” pattern (nose, taste, finish), where each subsequent phase is a step down in complexity, Revival is undoubtedly “A, A, A.”  And while the Oloroso Sherry influence is clearly notable, it’s certainly not overdone.  Honestly, it’s perfect.  Not only did Eddie Russell select bourbons with suitable maturation, he knew precisely how long they needed to rest in finishing casks.

When I reviewed Master’s Keep 1894 last year, I discussed storytelling and its commonplace in American whiskey – particularly when it comes to marketing limited editions.  It’s not uncommon for producers to incorporate a story into a release, yet far too often these tales and the whiskeys they’re associated with fall flat.  Unsurprisingly, the very method used to increase expectations is the primary reason they fail (as expectations simply aren’t met).  Fortunately, Master’s Keep Revival doesn’t need a story to give it purpose.  Sure, we read about Eddie’s travels in Spain and his selection of 20-year-old Jerez-Xeres-Sherry regional casks.  That’s not a tale – that’s a business trip.  Revival doesn’t need a story – Revival tells a story.

Very rarely does a whiskey accomplish what Master’s Keep Revival has.  There’s complexity in its uniqueness, gratification in its completeness, yet elusiveness in exactly what makes those traits so.  It has intrigue, mystery, revelation, wonder, and closure.  It reminds you of the past, opens your mind to the future, and ultimately provides a sipping experience that very few American whiskeys can (or ever do).  Last year Master’s Keep Decades received praise from numerous critics and industry publications, ranking third overall in Whisky Advocate’s Best of 2017.  With Revival, Wild Turkey has an even stronger contender for 2018’s Whisky of the Year.