I sometimes wonder if the bourbon train has gone off the rails.  And just when I think it has, I see something else that takes it to yet another painful level.  A train can’t go off the tracks more than once, can it?

If we’re strictly talking money, I get it.  Economics 101: Supply and Demand.  People want something and they’ll pay for it.  It makes perfect sense.  Bourbon was under-priced for decades – hell, scores.  Now it’s catching up to Scotch and some bourbon expressions are arguably there already.  But not Turkey – not traditionally.  No, Wild Turkey has always been the everyman’s pour.  Even their most sought after releases once collected dust – their worth realized far too late.  Take for example “Cheesy Gold Foil” and “Split Label” 101 12-year expressions.  Believe it or not, they didn’t sell well when they retailed domestically.  Where’s a DeLorean when you need one, right?

But while modern LE’s like Diamond Anniversary and Master’s Keep sit on shelves, folks clamor over the latest trendy sourced whiskey.  There are, however, a growing number of whiskey enthusiasts realizing Wild Turkey’s quality and value.  Case in point, the latest Single Cask Nation Wild Turkey offerings.  Literally hundreds of people registered as new SCN members just to have a shot at two limited releases.  Very few were successful.  With 263 bottles up for grabs and 1,500+ people online going for them at once, bad things were bound to happen.  And they did – immediately following the three minutes it took to completely sell out.

The last thing I want to do is drag a post into sad territory.  I try to be optimistic in life and have an aversion to negativity – especially associated with Wild Turkey – but there are important things to be said.  First, I’m sorry that everyone that wanted these releases couldn’t get one.  I feel in some ways responsible.  After all, my reviews and Instagram posts of previous Jewish Whisky Company releases have at the least spurred additional interest.  The number of members chasing the 2016 and 2017 WT Jewbilee bottles were significantly lower in comparison to the 2018 SCN bottles.

Second, I’m sorry Joshua and Jason of the JWC had to deal with so much vitriol after the online sales closed.  I’m not on Facebook, but I heard the comments were brutal.  Of all the people in this hobby, Joshua Hatton and Jason Johnstone-Yellin are two of the kindest and most understanding individuals you’ll ever meet.  They didn’t deserve what they faced, yet it happened nonetheless.  Kudos to them for hanging in there and coming up with a solution for the next time around.  Future SCN bourbon releases (whatever they may be) will be by lottery.  I think it’s about the best they could do given recent circumstances.

So the question is, are we now off the rails?  No – at least not yet.  In fact, I think we’re more on the track than one chooses to believe.  Bourbon enthusiasts are getting smarter – both with their money and their expectations.  They’re also more educated thanks to online communities like r/Bourbon and Straight Bourbon, as well as podcasts like Bourbon Pursuit and One Nation Under Whisky (a JWC production).  Yes, prices are going up.  That’s just going to happen when something is popular (particularly items associated with luxury).  But when you feel something crosses the line, vote with your wallet.  At some point if enough people feel and act the same way, the market will adjust.  And maybe that’s part of what went wrong with this last SCN Wild Turkey sale.  The JWC could’ve easily charged more for their bottles.  I’m glad they didn’t, but nevertheless had they charged twice what they asked they still would’ve sold out.  Again, kudos to Joshua and Jason for pricing what they felt the whiskeys were worth, not what the law of supply and demand allowed for.

And now it’s time to see how these Single Cask Nation selections fare.  As you likely know, these aren’t your standard everyday Wild Turkey private selections.  Jewish Whisky Company selections are single-barrel whiskeys bottled at barrel strength – something Wild Turkey hasn’t done for twenty years.  Thanks to the 2016 and 2017 Whisky Jewbilee WT releases, the bar has been set rather high.  But unlike those two bottles, which each came from rickhouse G, the 2018 SCN bottles come from rickhouses D and K.

There’s been some great Russell’s Reserve Single Barrel releases coming from rickhouse D lately, and K has always been a go-to rickhouse when you’re looking for fruity spice.  Which reminds me – if you’re a JWC podcast listener you might recall that the SCN K pick came from a barrel marked “rejected.”  Rejected?  Well, not for quality.  It was marked rejected (assuming by Eddie Russell) for being too far off profile for a single-barrel WT offering.  Sounds interesting, right?  Oh yes, this will be a fun tasting indeed! 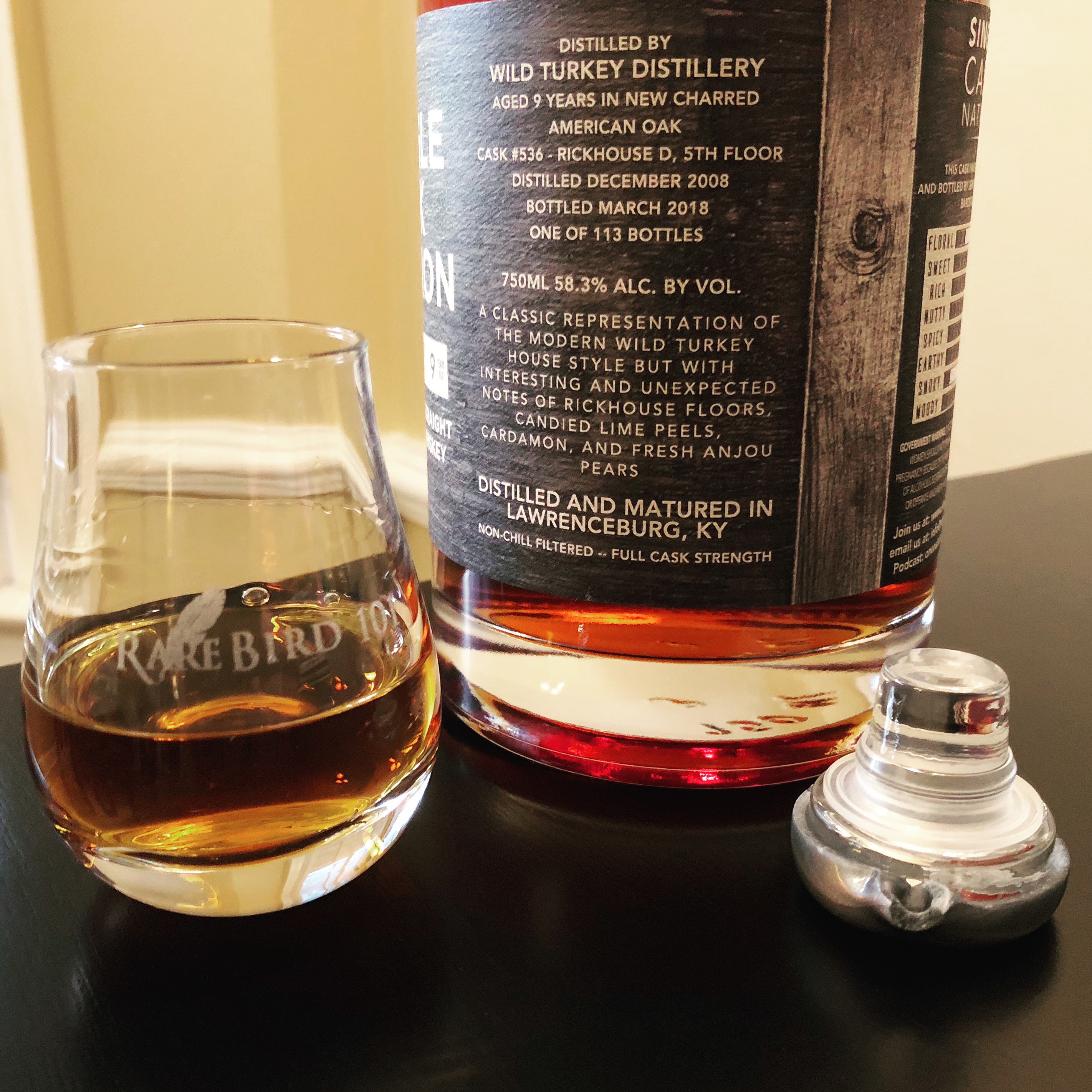 Overall:  This is everything you know and love about modern Wild Turkey, unfiltered and undiluted.  Creamy vanilla, chewy caramel, sweet charred oak, and plenty of spice … unmistakably Turkey.  In many ways it reminds me of Rare Breed batch 116.8, yet richer and rounder.  In fact, if one were to envision a non-chill filtered Rare Breed (absent the 6-year element), that’s very much the profile of this Single Cask Nation rickhouse D barrel.

All said and done there’s a lot going on here, but nothing exceeding my expectations.  I wish I could say there was, but I guess I’m so spoiled lately on quality Wild Turkey that it takes something truly unique or surprising to make a stronger impression.  But please don’t get me wrong.  I’m not saying this D pick isn’t a desirable barrel (it damn sure is).  I’m just saying that there’s Russell’s Reserve Single Barrel selections I’d consider comparable, as well as a few others I’d consider a notch finer. 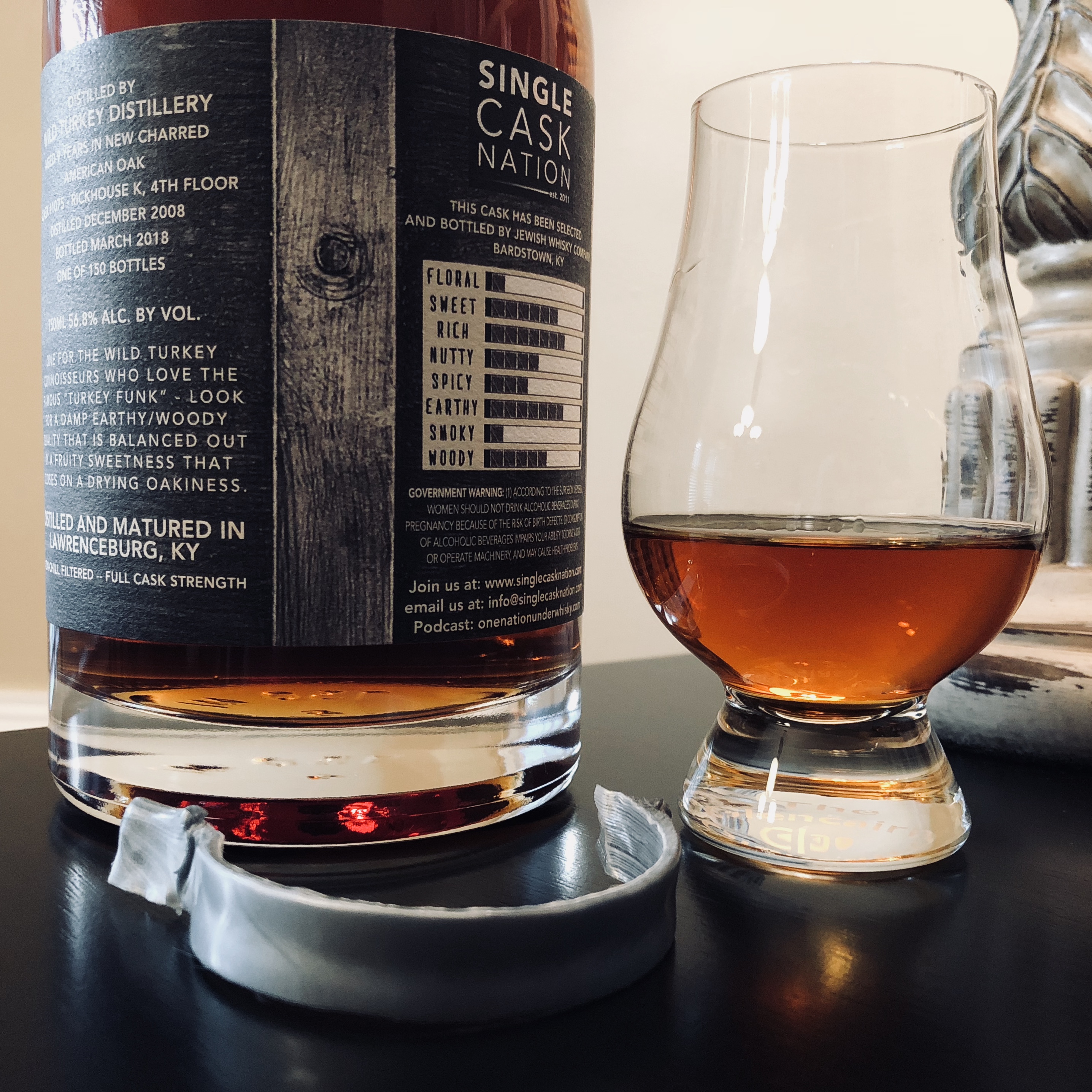 Overall:  Now this is what I look for in a Wild Turkey private barrel – a profile that you won’t find in an average everyday selection.  In some ways it’s similar to other rickhouse K barrels I’ve reviewed, Woodland Wine #16-369 and AWS #16-358 come to mind, yet kicked up at full barrel strength.  There’s loads of red fruit here – so much so it reminds me of my childhood dram of choice, Hawaiian Punch (Yo, Punchy!).  Behind the fantastic fruitiness you’ll find several signature classic Wild Turkey notes:  honey-maple, musty oak, brown sugar, and herbal spice.  And just when you think this pour’s given everything it’s got, you’ll find a little earthiness and vegetal funk laced in every sip.

I find it somewhat intriguing that this barrel was labeled “rejected.”  I’m assuming because of its intense fruitiness.  It’s a level of fruit more commonly found in some Four Roses Single Barrel selections – particularly those crafted from their O-yeast recipe.  That said, SCN’s rickhouse K barrel remains undeniably Wild Turkey.  It’s how I’d imagine a Russell’s Reserve Single Barrel and Four Roses OBSO blend to turnout (profiles and ratio depending).  Overall, a truly fantastic selection and one I’m thrilled to have in the Rare Bird “Cabinet of Favorites.”

Closing thoughts:  Perhaps the best thing about these two Single Cask Nation offerings is the fact that they’re so very different.  Yes, both are distinctly Wild Turkey; however, each offers a unique, yet enjoyable contrasting experience.  While my preference clearly leans towards the rickhouse K barrel, I could easily see other enthusiasts finding the D barrel their favorite (which was notably shorter in yield, interestingly).  And isn’t that ultimately the beauty of single-barrel expressions?  We all have our likes and dislikes – our ideal profiles.  If Wild Turkey strikes your fancy (and I’m assuming so since you’re reading this blog post), there’s a healthy chance that you’d consider one (or both) of these SCN bottles virtual perfection.

Cheers to Joshua and Jason for doing what they do (and to Campari and the Russells for letting them do it).  L’chaim & Sláinte!