If you like whiskey books about historical, initial-laden names, Nineteenth-Century liquor laws (yawn), bourbon fables and distillery folklore, this ain’t it.  Hacking Whiskey is about having fun and getting crazy with whiskey.  And nestled within its covers are two Wild Turkey blends from yours truly (thanks Aaron).  Since today’s post is all about blends, I thought it would be a good idea to kick things off with a blend from the book.

We Want the Funk

From my own experience, there isn’t a single definitive “funk” note in Wild Turkey.  That’s why you typically don’t find me referencing it in reviews nowadays.  Generally speaking, I think “funk” relates to a variety of profiles.  Obviously there’s dusty-era Turkey, with its intense herbal/floral perfume and dense musty oak.  That’s easily defined as funk in my opinion.  Then we have what I consider the classic profile:  rich honey-maple, herbal spice, and sweet musty oak.  Funky?  For some, sure – especially those more familiar with modern Wild Turkey.  And finally, there’s modern Wild Turkey with its nutty toffee and unique baking spice profile.  I wouldn’t necessarily call it funky by definition, but I certainly found it special when I first began appreciating it years ago.  And about that time I crafted the following recipe, which can be found on page 43 in Hacking Whiskey.

This was my first Wild Turkey blend I’d call a success.  It was a naive attempt at recreating dusty Turkey magic; however, keep in mind that Master’s Keep Seventeen-Year was distilled in the late 1990s and the Russell’s Reserve Single Barrel I used originally (a 2013 bottle) was distilled in the early/mid-2000s.  While Master’s Keep 17 was undoubtedly barreled at the old 107 barrel-entry proof, the 2013 Russell’s Reserve Single Barrel may have been barreled at either 107 or 110 proof.  (Still lower than the 115 barrel-entry proof used since 2006.)  While barrel-entry proof is only one of many factors contributing to the dusty Turkey profile, it’s a significant factor.  With that said, if you try this blend I’d recommend finding an older label Russell’s Reserve Single Barrel or a modern private barrel selection showcasing classic Turkey character.  You might just get lucky and capture some funky magic!

Forgiven but not Forgotten

This blend was originally posted on Patreon, August 11, 2018.

While I’m not a huge Wild Turkey Forgiven fan, a lot of folks out there are.  Since it’s very unlikely we’ll see Forgiven return (at least in past form), I thought I’d give an honest shot at trying to hack it.

Truth be told, I’ve tried several custom Wild Turkey rye and bourbon blends.  They’ve never really worked out for me.  Maybe rye and bourbon blends just aren’t my thing?  When I want a rye, I sip a rye.  When I want a bourbon, I sip a bourbon.  I’ve never really needed a middle ground, though there’s nothing wrong with preferring it.  You like what you like. 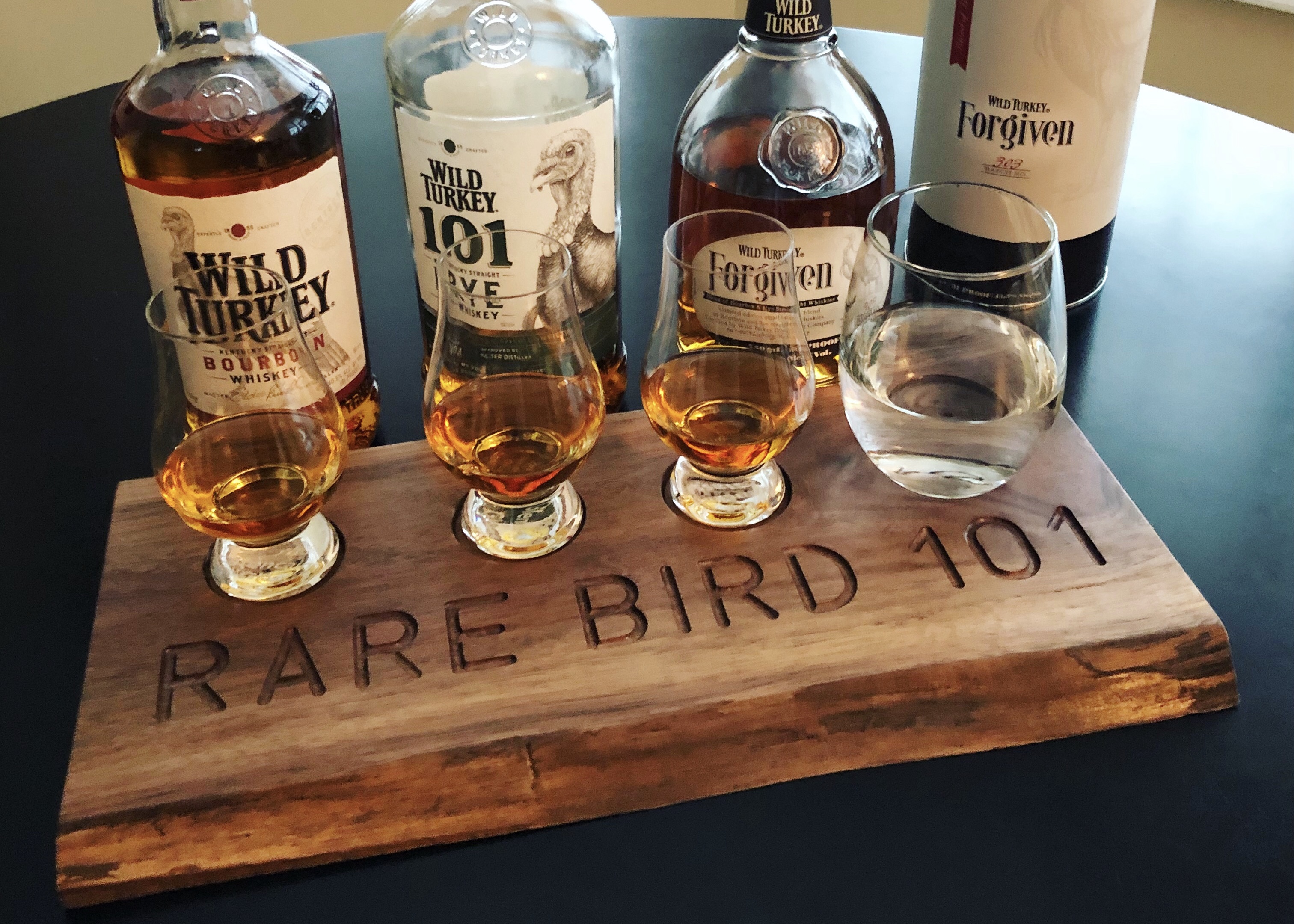 Knowing that Forgiven contains younger whiskey bottled at 91 proof, I set out to my local to pick up an 81-proof Wild Turkey Bourbon.  When I first popped the cork, I poured a few ounces for my 50/50 bourbon & Worcestershire burger marinade (simple, yet awesome).  After some tasty burgers and hot dogs, I immediately got to work.  Following several attempts at different percentages, I finally nailed down a blend I feel matches Forgiven – at least as close as it’s probably going to get with whiskeys you’ll find on a retail shelf.

And that’s it.  If you have Forgiven batch 303 on hand, give this blend a try. I think you’ll find the profiles are comparable.  Interestingly, the proofs line up perfectly.  Overall, I think it’s about as close as you can get without hunting the real deal.  But please don’t take my word for it.  Give it a shot and let me know what you think!

And last but certainly not least, my favorite Wild Turkey blend to date … Rare Bird 101.  What is Rare Bird 101 (the blend)?  I know, it’s starting to sound like merchandise from Spaceballs: The Movie.  But even so, I think Mel Brooks’ Yogurt would approve.

This recipe is easy and rather straightforward.  Simple parts means you don’t have to turn your kitchen into Mr. Wizard’s World.  Use a shot glass for measuring or simply “eyeball it” in an everyday rocks glass.  Give it a swirl and done.  I think you’ll find this blend to be firmly rooted in the familiar Wild Turkey 101 profile, though laced with maturity and added complexity.  The Rare Breed (batch 116.8) gives the blend a bold base, the Russell’s Reserve Ten-Year achieves dilution while introducing maturity at the same time, and the seventeen-year Master’s Keep adds significant complexity from an era long gone.  The combination of these three whiskeys make for a near-101-proof bourbon I think you’ll genuinely appreciate.

*Substitution – if you don’t have Master’s Keep Seventeen-Year, try Master’s Keep Decades.  It will result in a slightly different profile, though arguably as delicious.  In order to reach 101 proof, however, you’ll need to add a little less Rare Breed (as Decades is 104 proof vs. the seventeen-year Master’s Keep’s 86.8 proof).

In closing, I think the main thing to keep in mind when blending whiskey – Wild Turkey or otherwise – is to have fun.  Try to have a goal in mind but don’t get too disappointed if things turn out far different than you imagined.  Sometimes surprises make for wonderful discoveries.  Besides, whatever the outcome you’ll probably learn something new in the process – which profiles do or don’t work well together, and what’s better left alone.  At the end of the day, it all comes down to enjoying what’s in your glass.  If you accomplish that task … well, I’d call that success. Cheers!