It seems like every time I browse my local bottle shop there’s a new whiskey on the shelf.  Every rare once in awhile, one of those bottles just happens to be a new Wild Turkey.  Typically, it’s a limited edition, single barrel, or maybe just a new label for a standard expression.  Well, a couple of weeks ago I walked past the Turkey shelf to find a brand new Rare Breed, batch 116.8.  Not only was it a new batch, but a new bottle design altogether (glass and label).

I’ll have to admit – I hesitated.  After my experience with Rare Breed 112.8, I was nervous about the purchase.  Super-premium expressions aren’t cheap, and with Russell’s Reserve Single Barrel sitting right beside it, definitely a mental tug-of-war there.  But hey – have I ever been one to turn down any new Wild Turkey?  Surely not.  In fact, my blood type is WT-positive and my heart beats a steady 101 BPM.  Rare Breed 116.8 … welcome to your new home. 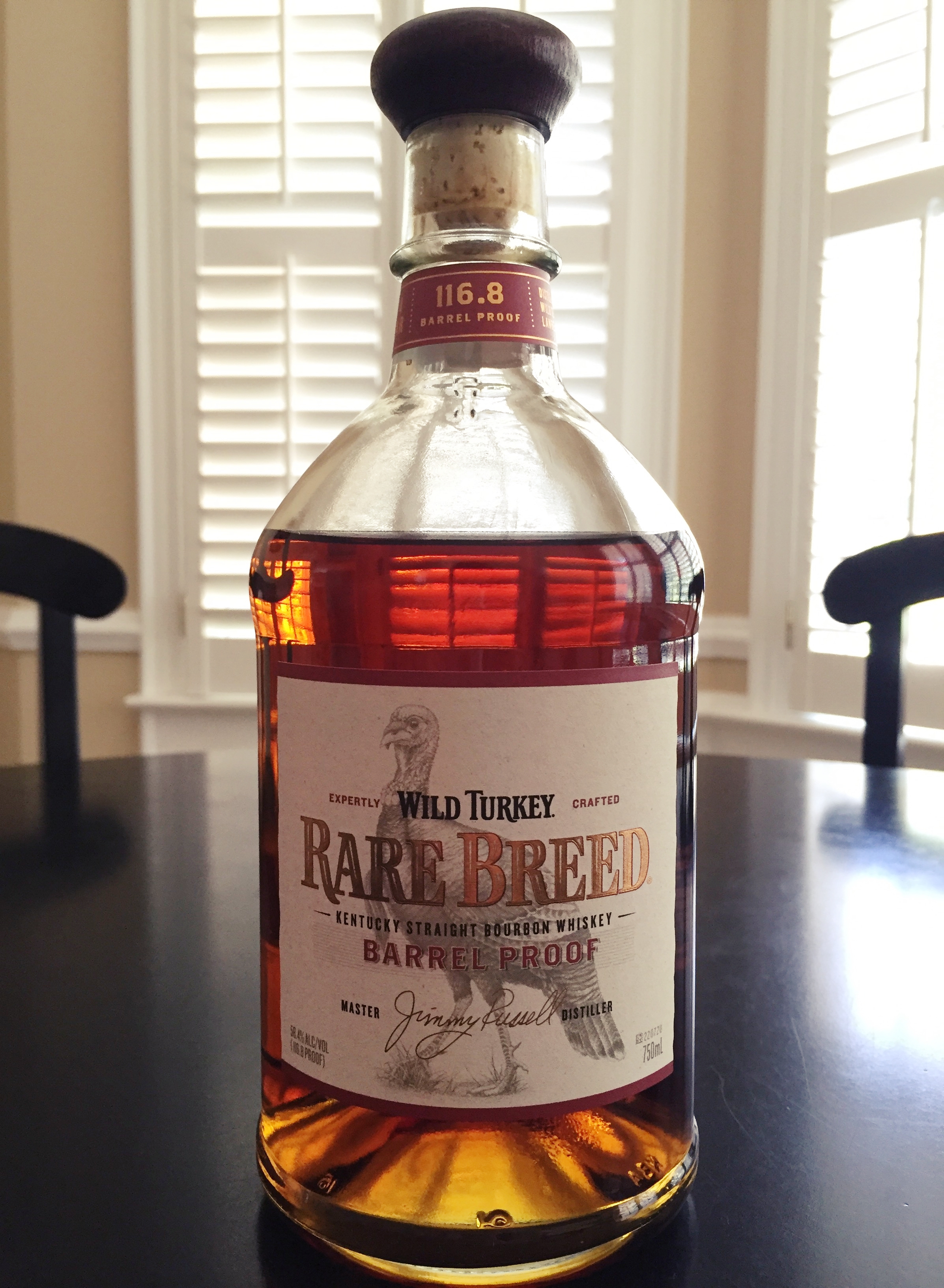 Before I review, let’s examine the details of this latest Wild Turkey Rare Breed.  First off, the proof is obviously higher.  In fact, it’s the highest ABV Rare Breed batch to date.  Second, batch 116.8 states “distilled and bottled by Wild Turkey Distilling Co.,” a change from previous batches which read, “bottled by the Austin, Nichols Distilling Co.”  And finally, RB 116.8 has a completely new bottle shape (same cork, though) with a redesigned label.  While an improvement over the aesthetics of the former batch, 112.8 (as well as a brief run of 116.8 in the older bottle), it’s still not quite as visually appealing as the classic 01-99 and 03RB label designs.

So, now it’s time for the true test.  Bottle designs, labels, and specs can only offer so much.  Besides, whiskey isn’t made to be displayed or admired.  It’s made for sipping, savoring, and sharing.  Anything outside of that and you’re missing the point.

Overall:  Well, Son of a Turkey … I’m sincerely happy I moved past my initial hesitation and picked up Rare Breed 116.8.  This, folks, is a big strut in the right direction. At its core, this bourbon shouts modern Wild Turkey in profile, but it’s all the best parts of modern WT.  Gone are the thin, sharp, and grainy attributes of batch 112.8.  Instead, we have a profile that fits somewhere between WT 101 and Russell’s Reserve Single Barrel (uncut to boot).  And boy is it fruity — fruity with a huge dollop of complementing spice!

So what changed?  What accounts for the differences between Rare Breed batch 112.8 and batch 116.8?  I’m not entirely sure, but I can offer a theory or two.

Per Eddie Russell, “a little” of the youngest whiskey in batch 116.8 comes from the new Wild Turkey distillery (operational as of 2011).  While I’m doubtful its volume is large enough to make a significant profile impact, it’s at least in there and that says something.  For some of the youngest whiskey in this batch (the de facto weakest flavor element in terms of complexity) to have come from the new facility … very good news for the future.

But the new distillery is merely a fraction (if any) of the difference between batches 112.8 and 116.8.  I believe the primary factor of difference boils down to improved barrel selection.  It’s my opinion (no basis in fact, just theory) that Eddie is selecting barrels that fit more of the Russell’s Reserve profile for Rare Breed.  Be it increased maturity or more intense complexity (or both), Rare Breed 116.8 tastes closer to Russell’s Reserve than any batch prior.  If that’s the case and remains so, I’m fine with it.  I’m really fine with it.

In closing, I’d like to stress (again) that Rare Breed 116.8 is a notable step above batch 112.8.  That means if you’re already a fan of 112.8, you’re certainly going to like 116.8.  If you aren’t a fan of batch 112.8 (similar to my experience), I’d suggest keeping prejudice from clouding your judgement.  Rare Breed 116.8 is an undeniably tasty and thoroughly enjoyable barrel-proof bourbon whiskey.  In fact, I’m giving it a well-deserved 3.5/5.  Yes, that’s the same rating I gave batch 03RB.  I understand that may ruffle some Turkey snobs’ feathers, but it’s my honest opinion.  While their profiles may be different (i.e. classic vs. modern), I think I might actually enjoy batch 116.8 over 03RB on a more regular basis.  That’s right – Rare Breed 116.8 is now officially a regular in the Rare Bird home.