Just six months in, 2018 has proven to be an incredible year for Wild Turkey.  It all started with the first official Wild Turkey bottle to feature a name other than Austin, Nichols, or Russell – Matthew McConaughey’s “favorite bourbon on the planet,” Longbranch.  Love it or loathe it, it’s a bonafide mainstream success that’s given Wild Turkey broader appeal and increased brand recognition among non-traditional Turkey drinkers.

About the same time Longranch made its debut, 2018’s Russell’s Reserve Single Barrel private selections were hitting shelves across the country.  Talk about some stellar bourbon whiskey!  This year’s barrels have been nothing short of excellent – particularly those coming from rickhouses B and D.  If ever there was a time to roll the dice on an assortment of Russell’s Reserve Single Barrel private selects, it’s now.

And just when you thought things couldn’t get any better, Master’s Keep Revival comes along and virtually redefines the gold standard of cask-finished American whiskey.  Revival exceeded my expectations in every way – seizing a respectable spot on my personal Top Ten and effortlessly easing my concerns about future experimental Wild Turkey releases (under Eddie Russell’s supervision, of course).  Yes, it’s that good. Truthfully, Wild Turkey could’ve stopped at Revival and called it a year.  But that wouldn’t be bold, would it?  No sir.  If you’re going to go full-Turkey, go 15-year, NCF, barrel-proof Turkey.  Go Russell’s Reserve 2002.

Now, let’s take a second to let that all soak in … 15 years in oak, non-chill filtered, barrel-proof Wild Turkey Kentucky straight bourbon whiskey.  Pretty impressive specs, I’d say.  And here’s another interesting fact to chew on.  The 25 barrels that comprise Russell’s Reserve 2002 were selected from rickhouses situated near Camp Nelson National Cemetery in Jessamine County, KY.  That’s right.  RR 2002’s whiskey matured in offsite rickhouses – much like Decades, which matured in the McBrayer rickhouse, or Master’s Keep 17, which matured (at least temporarily) in Stone Castle rickhouses.  What that says to me is that Eddie Russell simply didn’t walk next door to rickhouse A or B and pull a few honey barrels.  No, Eddie knew precisely what he had and where to go to get it. 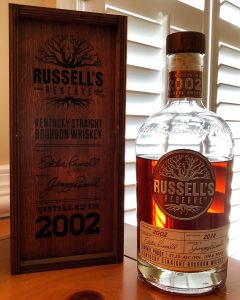 But here’s the problem – 25 barrels of 15-year barrel-proof KSBW doesn’t equal a lot of bottles.  Not at all. Only 3,640 to be exact.  In fact (and I’ll be completely honest here), I have a bit of what I can only describe as “survivor’s guilt” when it comes to Russell’s Reserve 2002.  So many Wild Turkey fans want this release, yet there are so very few to go around.  And from what I’ve heard, the secondary market has already gone berserk regardless of allocations still in process.  Taking all of this into consideration, I owe readers a thorough and unashamedly honest review.  I certainly don’t want to see folks paying hundreds of dollars over the already hefty $250 price tag – not if they shouldn’t need to.

I’ll stop right there and reserve my praise and criticisms for after the tasting.  I should offer fair warning, though.  This review gets a pinch salty.  It wasn’t my intention – it’s just how things turned out.  But no need to dilly-dally any longer (these barrels have waited 15 years long enough).  Let’s have a pour and see what Russell’s Reserve 2002 has to offer, shall we?

Overall:  I’m not going to lie – Russell’s Reserve 2002 is an excellent bourbon whiskey.  Right from the start two features immediately stand out:  its impressive maturity and its intense complexity.  One could literally nose this bourbon for hours (okay, guilty).  Yet at the same time I wouldn’t call this pour entirely balanced.  It comes very close to tasting as decadent as the nose leads you to believe; however, it’s nearly interrupted by a slightly tannic and astringent presence.  Faint, but present nonetheless.  Some folks enjoy that in a bourbon, but I can only appreciate bitter and drying notes so much.  Luckily, Russell’s Reserve 2002 hesitates from crossing that line (at least for me personally), though it flirts with it … heavily.

As I sit here finalizing this review I find it difficult to refrain from drawing comparisons to Master’s Keep Revival.  Sure, they’re completely different whiskeys.  Revival is an experimental sherry-finished whiskey, while Russell’s Reserve 2002 is a traditional straight bourbon whiskey.  Yet I can’t help but see a greater disconnect between them.  It’s as if Revival were a Stradivarius violin and RR 2002 a factory-new Ferrari. WTH, right?  Work with me here.  What I’m referring to is the difference between genuine rarity and artificial rarity.  Please allow me to elaborate.

A Stradivarius violin is genuinely rare because of Antonio Stradivari’s dedication to craftsmanship and the sheer surviving number available after centuries gone by.  Regardless of one’s opinion on their sound or performance, these instruments are true rarities that simply cannot be duplicated.  A new Ferrari, on the other hand, is rare solely because the manufacturer chooses to limit production to a set number of vehicles each year.  While expertly crafted, their rarity is arguably artificial due to imposed limitations, not inherent limitations.

You might be thinking, barrels aged 15-years are inherently limited, right?  Sure, but out of the 20 +/- rickhouses Wild Turkey owns and manages, there were only 25 well-aged barrels?  I highly doubt it.  Here’s what’s truly limited – Wild Turkey KSBW patiently resting in imported 20-year-old Oloroso Sherry casks.  What Eddie accomplished with Revival is a genuine rarity – a masterful work of art.  Carefully blending 12-15-year select KSBW barrels, finishing the resulting batch in a handful of vintage Spanish casks, and finally, meticulously evaluating each cask’s progress to determine peak sherry influence … that’s dedication – that’s craftsmanship.

Now please don’t jump to conclusions.  I’m not saying that Russell’s Reserve 2002 isn’t a notably fine bourbon whiskey deserving of praise and recognition.  Nor am I saying it wasn’t carefully crafted.  I’m quite certain it was.  What I’m saying is that it seems artificially rare – at least the marketing appears that way.  For example, here’s the headline from RR 2002’s official press release:  With First Barrel Proof Offering, New Contender for ‘Unicorn’ Status Enters the Bourbon Lexicon: Introducing Russell’s Reserve 2002.  I’m not sure about you, but I hear that being read by the guy that announces all the big-ticket Heavyweight Boxing events.  “Let’s get ready to RUMBLE!!”  And “unicorn?”  That’s not Wild Turkey.  What are we?  Pappy now?  Please god, no.

I guess I’ve had my say at this point – probably more than my say.  I started my night with Russell’s Reserve 2002; finished my night with Master’s Keep Revival.  Or in other words, I chased a “unicorn status” whiskey with yet another inevitable Wild Turkey shelf turd (wake up, America).

Russell’s Reserve 2002 is a fantastic pour, without doubt.  But here’s the thing – so are numerous other Wild Turkey bottles.  Master’s Keep Revival is but one recent example.  From Russell’s Reserve Single Barrel private selections, to the past several years of Wild Turkey limited editions (particularly Decades), there’s plenty of quality Turkey out there to be found.  More importantly, you don’t have to spend $250 (or four times that) to find it.  If you’re contemplating Russell’s Reserve 2002 at retail, it’s a fair purchase.  Outside of that, gobble on!

Special thanks to Campari and their PR team for the generous sample.  Also, thanks to SC Campari Manager, Amy McClam, and Adam Howard of Beverage Outlet, Lexington, SC for ensuring me the opportunity to purchase this bottle.