Unless you’ve been living “device-free” for the last two weeks, you’ve undoubtedly heard of Wild Turkey Longbranch.  For those unfamiliar, Longbranch is a collaboration between Wild Turkey Creative Director, Matthew McConaughey, and Master Distiller Eddie Russell – the result of a two-year collective work.  In a nutshell, it’s Matthew’s “favorite bourbon on the planet.”  But you don’t have to take my word for it.  Perhaps this release is best described by McConaughey himself in his latest promotional video (below).  So give it a watch if you haven’t already and we’ll pick back up when it’s over.

And the Oscar goes to … Matthew McConaughey for Best “Make Me Want to Sip a Bourbon” video.  Damn, that dude’s talented.  But seriously, it’s a quality production that does an excellent job explaining the origin, design, and purpose of this bourbon whiskey.  Here’s my primary issue:  Longbranch isn’t exactly a whiskey enthusiast’s dream pour – at least on paper.  Sure, there are a few specs to possibly get excited about (or at least provide a sense of relief).  Let’s examine these, shall we?

First and foremost, it’s a straight bourbon whiskey using the signature Wild Turkey “high-rye” recipe.  Thank gobble Eddie kept this one from becoming a liqueur, as Matthew had admittedly considered adding sugarcane and cinnamon (not alright-alright-alright).  It’s also eight years of age according to the video and website.  While not formally age-stated on the bottle, $40 isn’t unreasonable for a NAS special edition whiskey in today’s market (and I’ve seen it priced less FWIW).  And finally, Longbranch is filtered through oak and mesquite charcoal – not simultaneously, but one following the other.  Filtering and bourbon aren’t words I usually like seeing together, but okay – mesquite sounds unique.  Maybe it will add something special?

Now, before we move to the tasting let’s keep a few things in mind:

I like a couple big cubes to cool it off.  Wet it down, water it a hair.  Let it sit there for about four, five minutes before I have my first sip.  Let it take the edge off with that ice.  Let it liquidate just a hair, cool down just a hair.  Nice.  While the sun’s going down, right about then, let those two cubes melt, and sip on that.  That’s what I like. – Matthew McConaughey

I think that reveals a lot in just a few short sentences.  Not that it’s a bad thing – the best way to sip whiskey is the way you enjoy it.  That said, if you recall the promotional video for Longbranch, Matthew did venture into enjoying bourbon neat.  In fact, that’s when he decided Longbranch was complete – when he liked it neat.  What does that sound like to me?  Well, it sounds like someone digging deeper into the rabbit hole we all know too well … whiskey enthusiasm.  At least McConaughey can afford the dusty bottles, amirite?  Anyhow, on to the tasting!

Tasted neat in Glencairn after a few minutes rest …

Overall:  In many ways Longbranch is exactly what I was expecting:  a step above Wild Turkey KSBW (81 proof).  In other ways it’s somewhat disappointing.  I was really looking forward to the Texas mesquite influence.  Quite frankly, it’s just not there.  Sometimes I catch a hint of what might be smoke, but then if I’m honest with myself it’s probably just me looking for it.  I was really hoping for “rural Heartland meets big Texas.”  Like if John Mellencamp ever recorded a song with the late (undeniably great) Stevie Ray Vaughan.  In this case, however, Stevie’s guitar solo got cut for running time.

But don’t get me wrong.  Longbranch isn’t a bad whiskey.  It’s an easy pour with more complexity than typical bourbons in its class.  In fact, I think it’s perfect for easy sipping or folks new to whiskey.  Just ask the NBC Today Show’s Sheinelle Jones.  On a recent episode featuring a tasting of several Wild Turkey expressions, she was sipping Longbranch like it was southern sweet tea.  “It’s so good,” gushed Jones (several times).  She undoubtedly thought so, as her glass dried up in a matter of minutes [fist bump Sheinelle].  That’s exactly what I mean when I say it’s perfect for folks new to whiskey.  Forget Basil Hayden’s or Gentleman Jack – Longbranch is the new beginner’s quality dram. 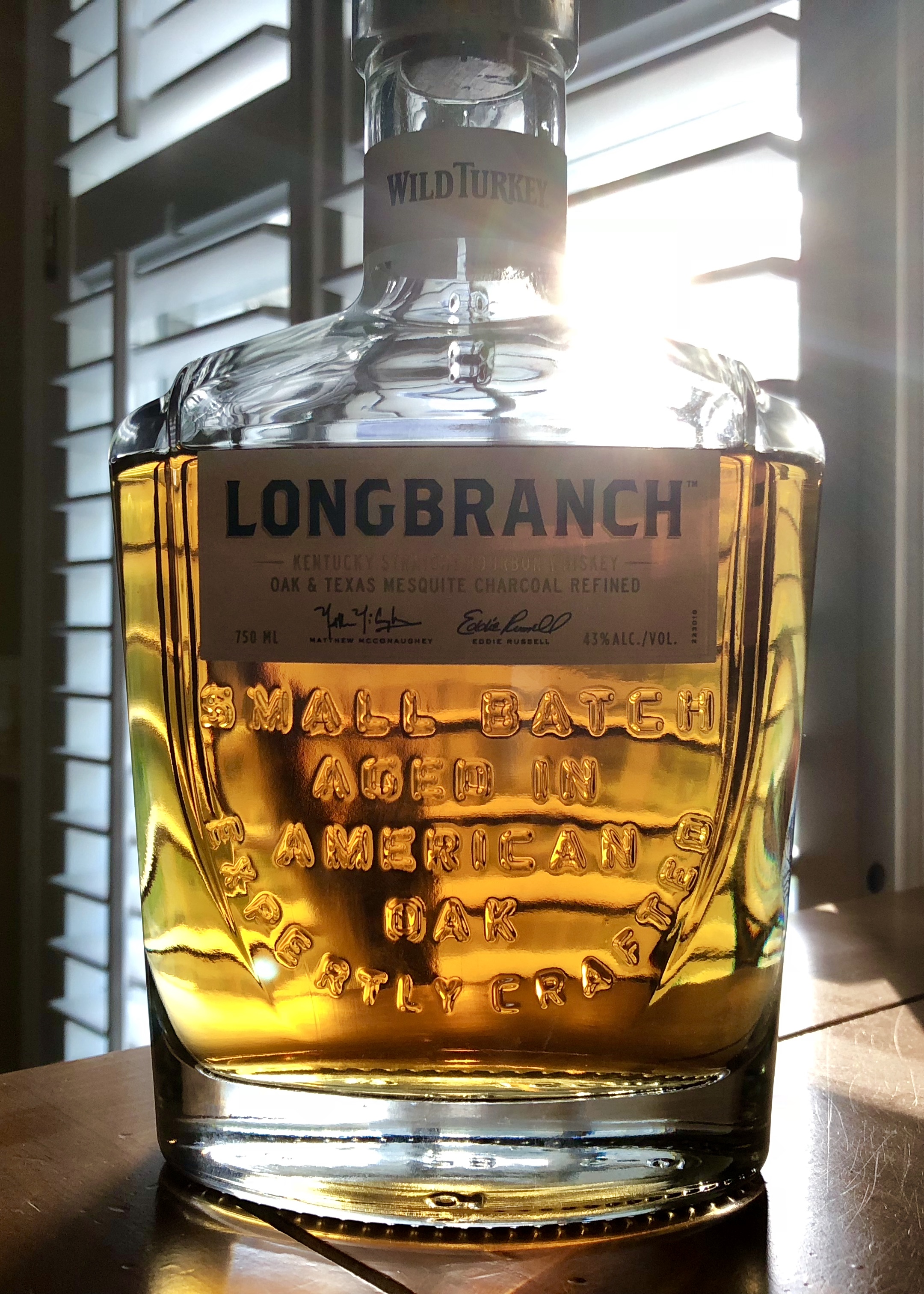 In closing, I want to wrap up by congratulating Matthew McConaughey for creating a whiskey that turned out exactly as he’d hoped.  Longbranch is after all his perfect bourbon.  As an artist myself, it’s remarkably satisfying to see the outcome of one’s work as originally envisioned.  I think this is McConaughey’s strength and why he’s done so well as an actor and creative director.  But let’s be straight – Matthew doesn’t know bourbon – not like the Russells.  We know that and he knows that.  Thankfully, Eddie was able to provide the guidance Matthew needed and in that Eddie deserves a congratulations as well.

Here’s what I hope the takeaway from all of this is … Longbranch is a well-crafted KSBW ideal for the casual drinker or novice enthusiast.  Truthfully, Wild Turkey needed an expression like this, as I don’t see many novice enthusiasts reaching for 81-proof WT KSBW.  So if you know someone just getting started in the hobby, recommend Longbranch without hesitation.  The same goes for fans of Basil Hayden’s, Gentleman Jack, or any other lower-proof super-premium release.  Longbranch will definitely take those whiskeys to task.  As for the diehard Turkey fans, I think it’s worth picking up at least once.  Hell, whiskey enthusiasm is all about the journey anyway.  Godspeed and JKL (just keep livin’).

Special thanks to Campari and their PR team for the bottle and the chance to review this whiskey.