Another year has come and gone, and with it, some truly remarkable whiskeys.  Going into 2018 I had high hopes for Wild Turkey.  Not only were those hopes exceeded, but in many ways they arrived with a personal touch. (Happy 101st anniversary Jimmy & Eddie!)

To say that this year was rewarding as a Wild Turkey enthusiast would be an understatement.  This year was phenomenal.  Now it’s time to showcase a handful of noteworthy whiskeys that made it so.  This is 2018’s The Best of Wild Turkey.

As with last year’s Best of 2017, the premise is the same:  recognize Wild Turkey releases that aren’t just quality pours, but offer traits one could argue as unique or special.  Ratings will of course factor into the selection process, but it’s important to note they won’t be the sole determining factor.

My rules are simple (no changes from 2017).  To be eligible for selection a release must be:

That pretty much covers it.  And now, I proudly present The Best of Wild Turkey 2018.  Enjoy! 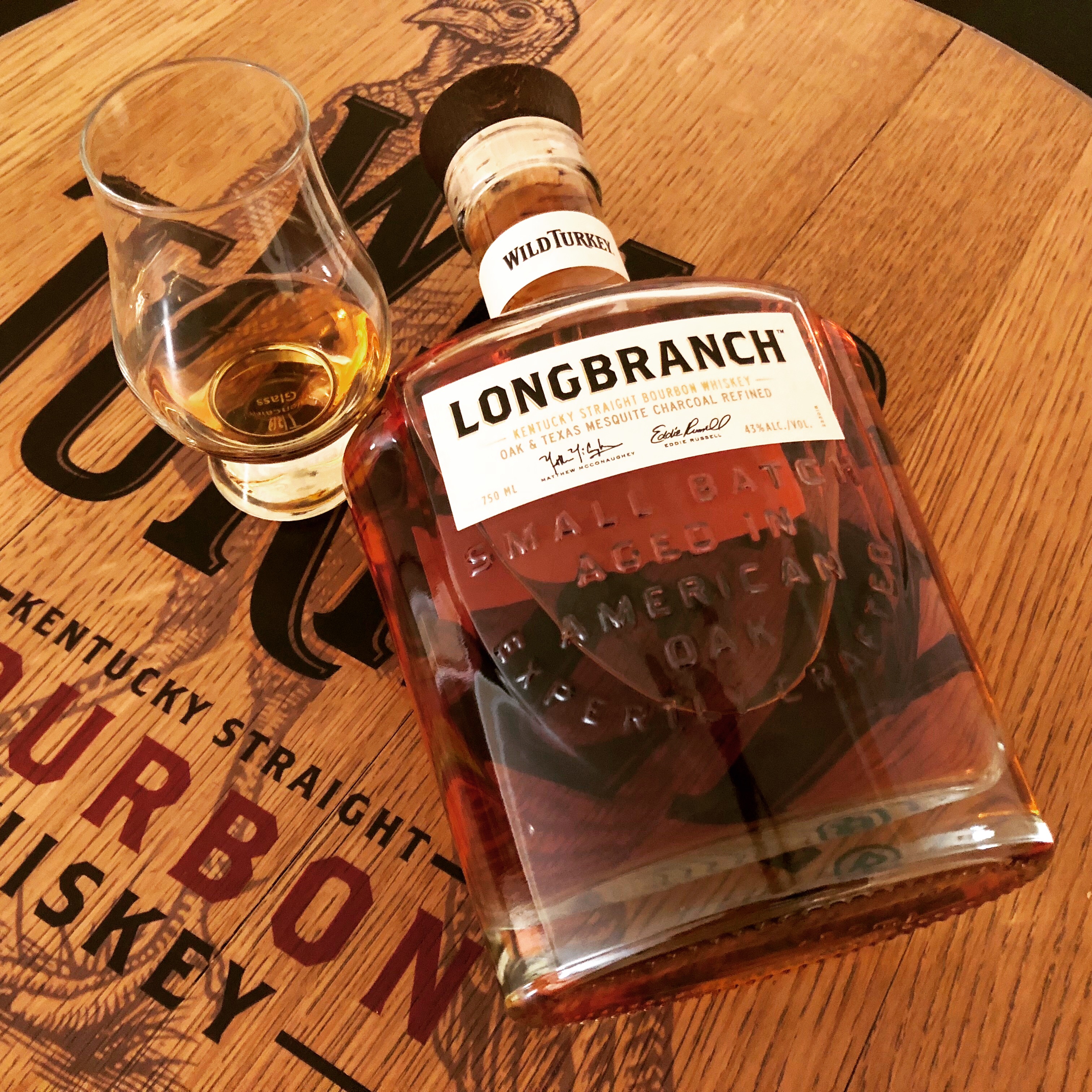 Spring of 2018 saw the arrival of the “Lincoln Town Car of Bourbon,” Wild Turkey Longbranch.  It seems the company’s famous Creative Director finally found an alright (alright, alright) bottle of his own – a unique combination of eight-year bourbon and Texas mesquite refinement.  While I didn’t find Longbranch all that appealing as a diehard enthusiast’s neat sipper, I did find it outperformed notable whiskeys in its class, specifically Jack Daniel’s Gentleman Jack and Jim Beam’s Basil Hayden’s.  Longbranch’s design, however, established a new standard for celebrity whiskey expressions.

Truth be told, Longbranch’s glass bottle was originally intended as a Wild Turkey Kentucky Spirit redesign (a 2016 TTB filing helps to illustrate).  But when you have an A-list creative director, you need an A-grade bottle for their whiskey.  The intended Kentucky Spirit redesign took a back seat to Longbranch, and it only made sense.  It’s hefty like Texas, yet simplistic and graceful in its display of Kentucky’s finest within.  With antique-styled embossing, classy minimalist labeling, and a solid wood stopper with the girth and feel of a small oak branch, Longbranch looks undeniably handsome on any whiskey shelf.  If only we could have the same for Kentucky Spirit.  How about it, Campari? 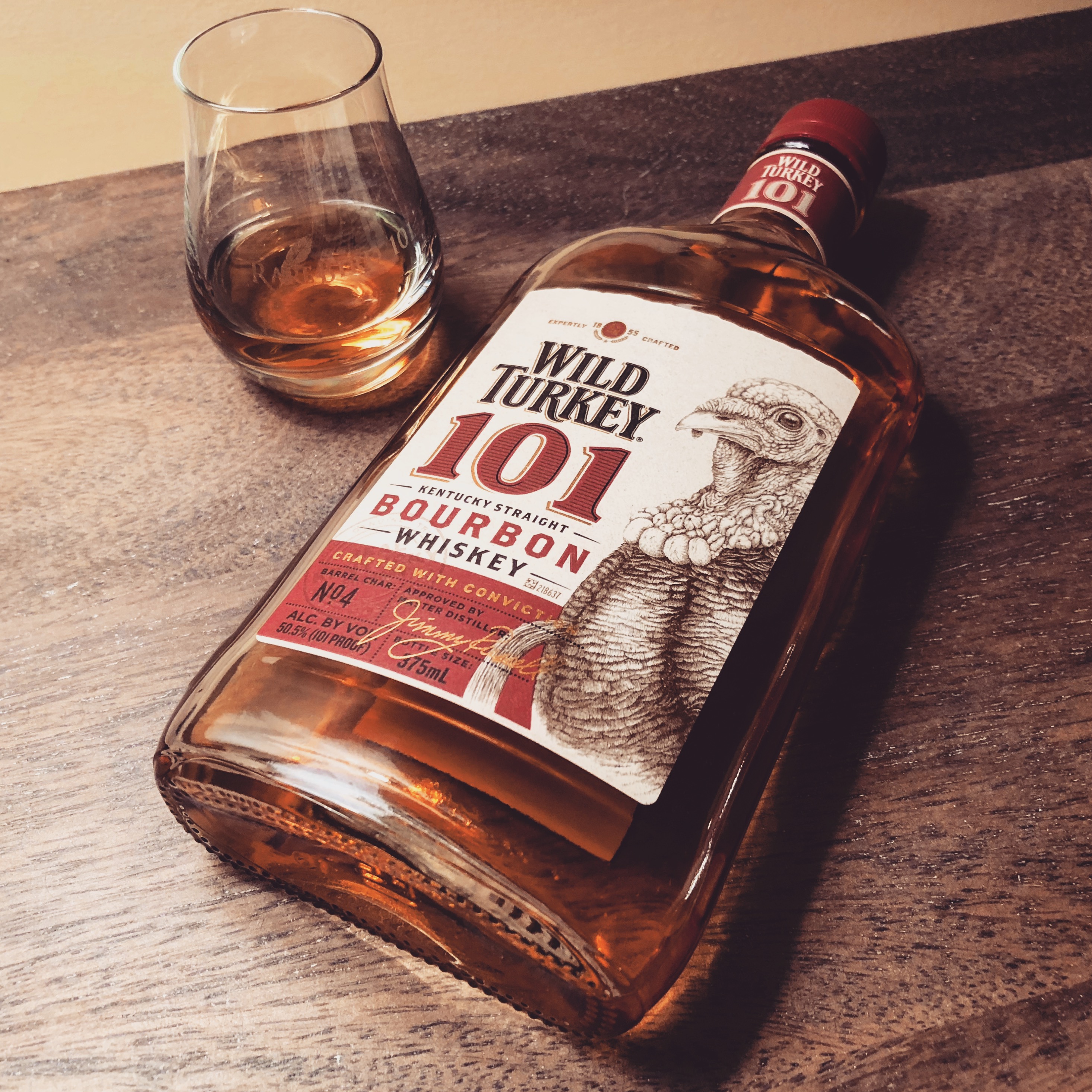 Old Faithful, “The Daily,” the Kickin’ Chicken, yes I’m talking about the stalwart everyman’s pour, Wild Turkey 101.  You might be asking, why 101 for Best Core Expression of 2018?  After all, I’ve yet to formally review a 2018 bottle.  True – but – that doesn’t mean I haven’t been sipping them!  At this point I’ve tasted enough bottles to know that when it comes to Wild Turkey 101, all batches aren’t created equal.  Without doubt modern 101 is consistently good, but find yourself the right bottle and you’ll be rewarded with a strikingly flavorful and balanced pour (all for less than $25).

While Wild Turkey 101 has remained a staple in my home for years now, these mid/late-2018 bottles are something to be treasured.  But you don’t have to take my word for it.  No sir, no m’am. Next time you’re at your local bottle shop, pick up a bottle.  Grab a 375ml or mini if you want a minimal investment.  The key is locating a bottle code beginning with LL/G.  G is 2018 and the letter following is the month (A is January, B is February, etc.).  Buy several different dates and taste them side by side.  You might be surprised.  And if you think I’m spoiling my upcoming review by revealing which code I’m really excited about, think again!  🙂 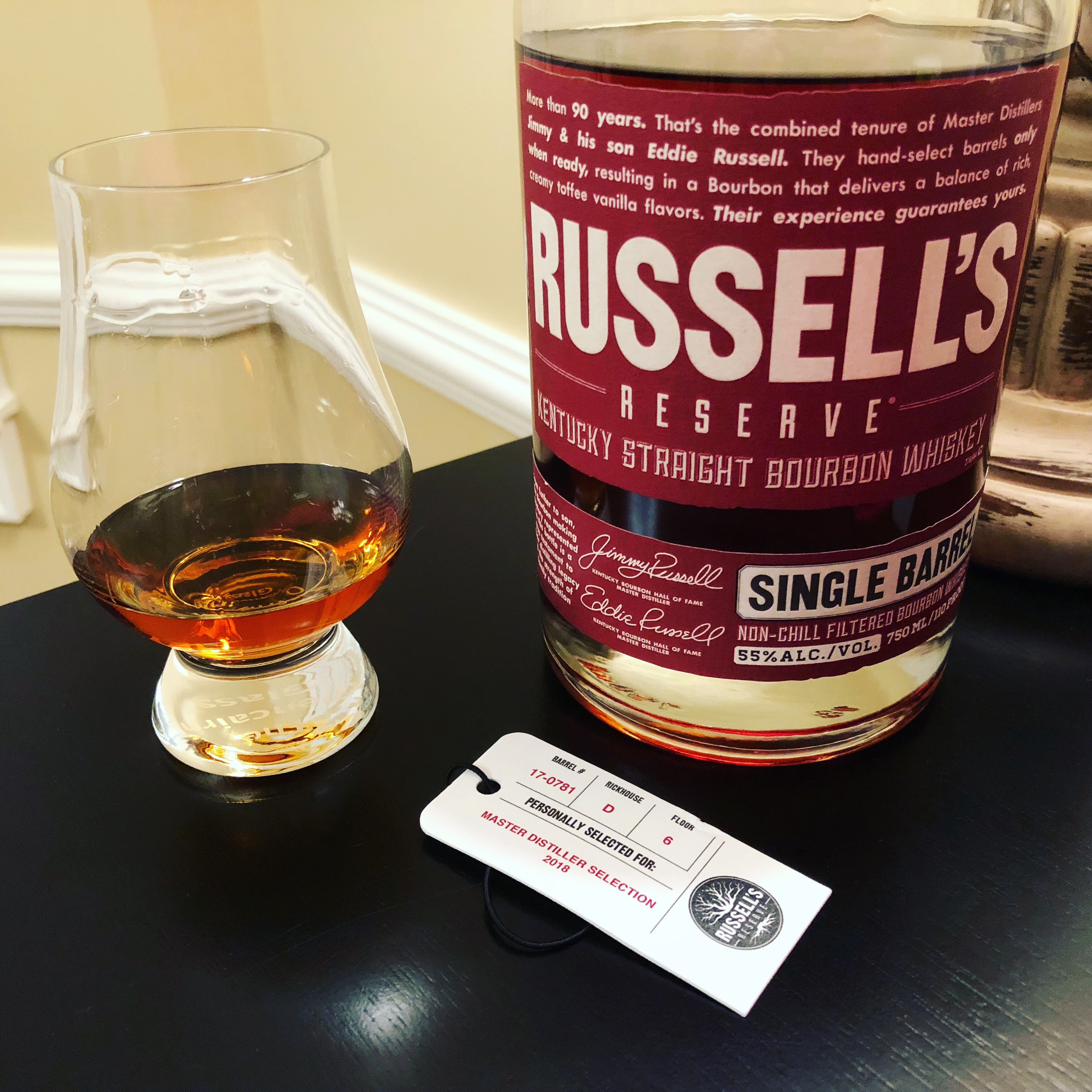 2018 was arguably the year for Russell’s Reserve Single Barrel private selections.  It all started with Lexington Bourbon Society’s “Final Pour.”  But while that release set a high bar in quality, it did little to prepare me for the choice barrels that followed:  Motor Supply Co.’s rickhouse D barrel, Beast Masters’ “That Old Kentucky Chew” (rickhouse B), Barrels & Brews’ “Haters Gonna Hate” (rickhouse H), and last but certainly not least, the distillery exclusive Master Distiller Selection (rickhouse D).

What made the 2018 Master Distiller Selection so special?  Well, it’s not often that you find a single barrel selected by four esteemed Kentucky master distillers:  Jimmy and Eddie Russell, Fred Noe of Jim Beam, and Chris Morris of Woodford Reserve.  Talk about a lineup!  It was such a unique event I had no choice but to take a few “creative liberties” with its backstory.  😉  As for the bourbon itself … rich and robust Tyrone-aged excellence.  A near-perfect combination of ideal maturity, intense complexity, and rare balance.  Well done, gentlemen. 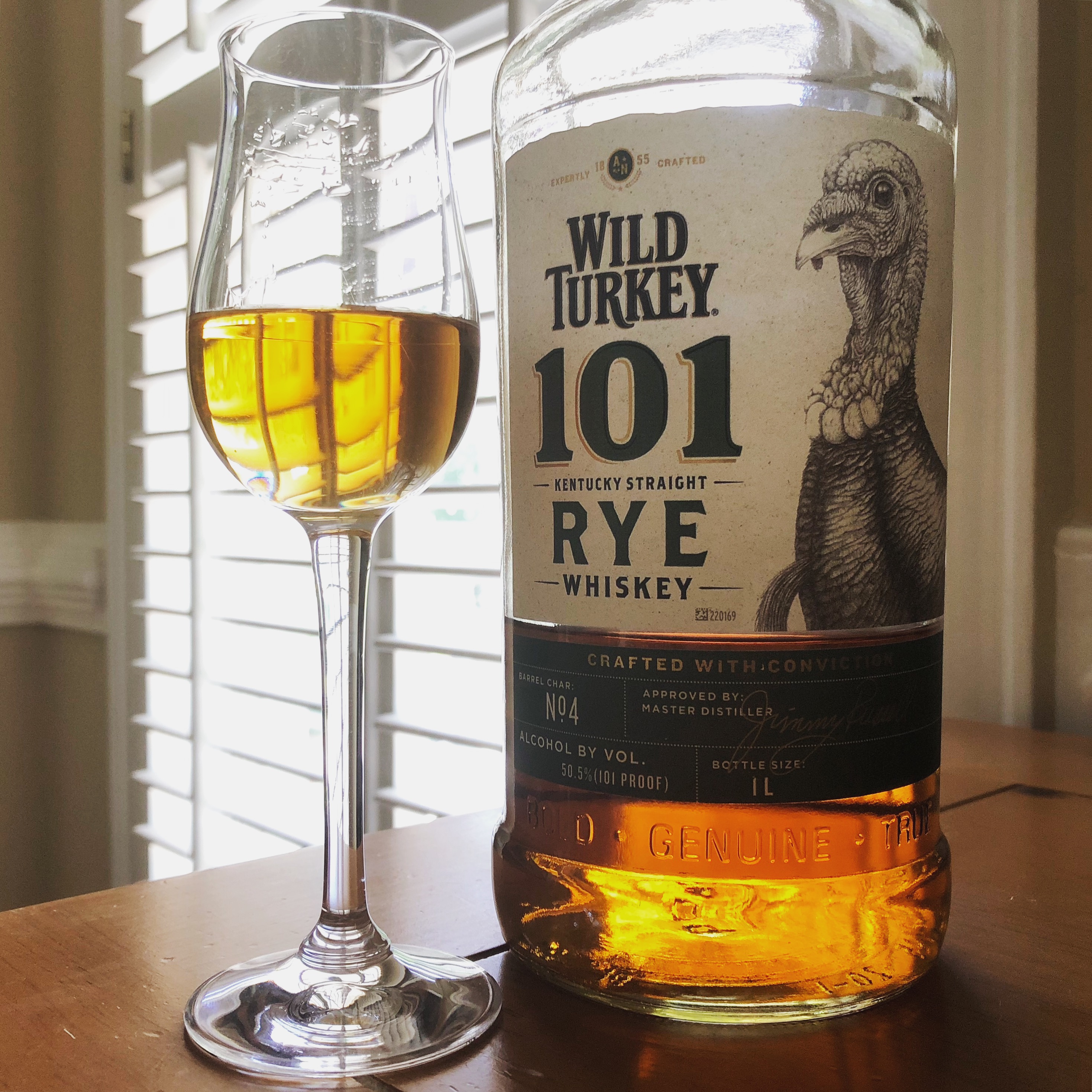 2017’s Best Straight Rye holds on to its crown!  Having just reviewed this expression last week I don’t think there’s much more to say about Wild Turkey 101 Rye, though there’s one thing worth repeating:  It’s hands down the best Kentucky straight rye whiskey in its price tier.  If you can find something better for the money, I’d certainly like to hear about it.  (Don’t worry.  My inbox isn’t sweating it.) 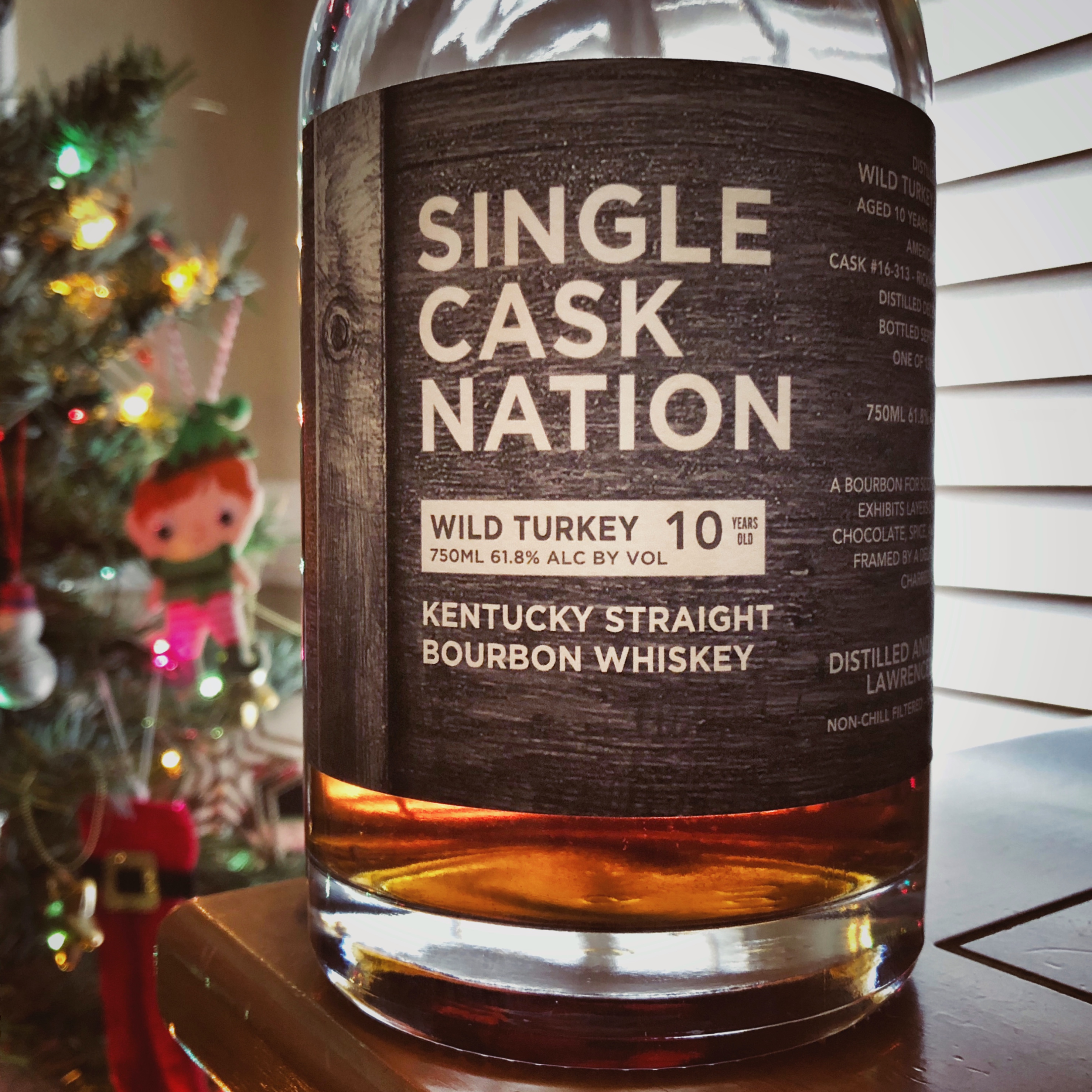 Those Jewish Whisky boys have done it again!  There was a time I thought that Single Cask Nation and Whisky Jewbilee bottlings had a slight advantage over Wild Turkey branded selections simply because the JWC bottles at barrel proof.  While I can’t dismiss that argument altogether, I can say that for me personally, I’ve come to realize that significant mojo comes from Joshua Hatton and Jason Johnstone-Yellin.

Two Single Cask Nation bottles stood well above the single-barrel crowd this year (a tough year to stand out in, I might add).  Barrel #1075 is a funky and fruity rickhouse K flavor bomb.  Originally marked as “rejected” by the distillery, Joshua and Jason couldn’t resist tasting a misfit barrel (and I’m so glad they took that chance).  The result is in many ways a throwback to the old-school “Wild Turkey Funk.”  An amazingly unique and contemplative whiskey.  But just when you thought the JWC duo had their shining “chance-of-a-lifetime” barrel moment, they had a helluva surprise waiting for us … barrel #16-313.

Single Cask Nation barrel #16-313 is a bourbon tour de force.  The label states “a bourbon for Scotch drinkers,” but don’t let that statement fool you.  This Wild Turkey barrel tastes nothing like distilled malted barley; that said, it has every bit of the layered complexity and timeless charm of a highly cherished bottle of vintage Scotch whisky.  It has dark chocolate.  It has pipe tobacco.  It has molasses, horehound candy, sweet smoke, and countless thought-provoking notes that ultimately leave an indelible impression bordering whiskey perfection.  It’s the Best Single Barrel of 2018 and the Jewish Whisky Company (and Wild Turkey) should be proud. 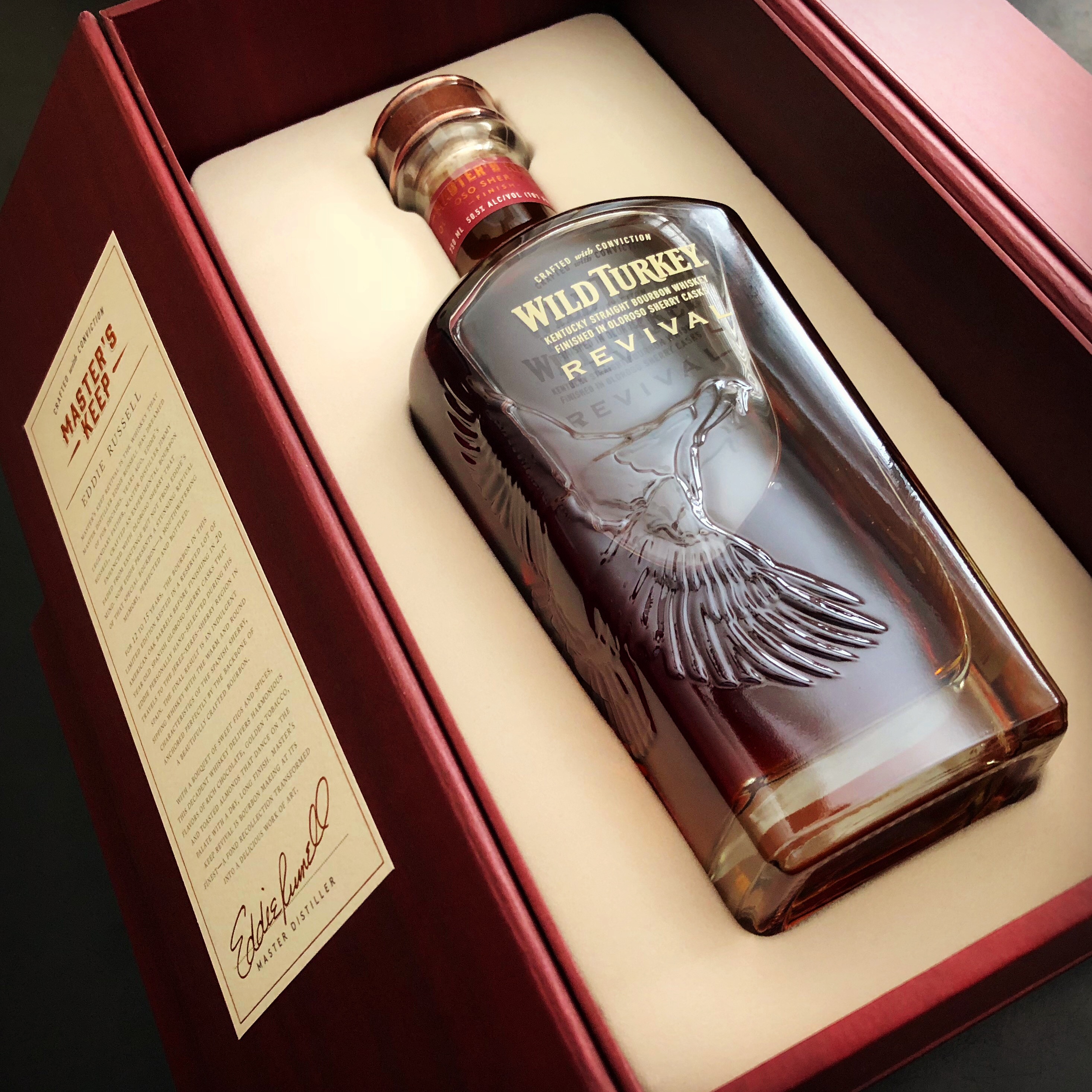 We all knew it was coming, but no one (not even a Turkey fanatic like me) was prepared for how incredibly delicious Wild Turkey Master’s Keep Revival would be.  Talk about a complex whiskey!  The thing I love most about Revival is that it’s so “outside of the box,” yet at the same time it ironically isn’t.  Scratching your head?  Think of it like this – while twenty-year-old Spanish Oloroso Sherry casks undoubtedly added their “Old-World” signature touch to the twelve- to fifteen-year bourbon, Revival stayed well within the beloved classic Wild Turkey profile.  We have Master Distiller Eddie Russell and his hard-working team to thank for that.

From day one Revival was Eddie’s baby, and boy did he raise it well.  There’s plenty of brands finishing whiskeys, primarily rye, in ex-wine casks.  From craft distilleries to major producers, some do it better than others, yet few do it well with bourbon.  What Eddie accomplished with Revival is a masterwork.  An impeccable example of dedication and craftsmanship that will be revered for many years to come.  It’s my favorite whiskey of 2018 and it deserves every bit of praise a whiskey enthusiast can give.  Congratulations, Eddie.

A most sincere thanks to everyone that helped make 2018 a fantastic year for Wild Turkey.  From the Russell family and the entire distillery crew in Tyrone, to the kind folks at Campari USA, I thank you.  From Joshua and Jason of the Jewish Whisky Company, to Fred Noe and Chris Morris, y’all picked some stellar barrels and I thank you.  And finally, to all my bourbon family, friends, patrons, supporters, followers, and readers, I wholeheartedly thank you.  2018 has been wonderful and I can’t say thank you enough.  Here’s to 2019 … Cheers!