There’s three types of consumers:  informed consumers, uninformed consumers, and consumers that honestly don’t care.  Outside of sharing my appreciation for Wild Turkey (and the occasional history lesson), I strive to be an informative source – to share my thoughts with enthusiasts about which expressions may or may not be worth their hard-earned money.

Let’s rewind.  I didn’t intend for this post to begin this way.  I didn’t even intend for this post to be published this week (much less today).  As many of you know, I prefer to post weekly on Turkey Tuesday.  Unfortunately, things happened this past week that sincerely troubled me.  It’s not that I didn’t think it could happen, but I’d honestly (and naively) hoped it wouldn’t.

First, let me be clear that I’m not arguing against secondary whiskey markets.  They exist, and by nature aren’t necessarily bad things.  Take for example Willett to be Cured.  Several weeks ago the critically praised whiskey auction raised nearly $340,000 to fight cancer.  Epic bottles were purchased for an undeniably epic cause.  It was a good thing – a wonderful thing.  It was genuine and encompassed so much of the very best of this hobby.

But then there’s another side.  A far less genuine side where folks literally walk into a store, buy a $60 bottle – a bottle they have zero desire to sip, gift, or even trade at reasonable value – and almost instantly offer it for sale via online secondary markets at more than six times its retail price.  And the worst part?  A $60 bottle that had every intention of honoring a remarkable 101 years of Jimmy and Eddie Russell’s combined service in the bourbon industry.  Conceived and designed by true Wild Turkey fans, in true admiration.  A tribute, not a commodity.

Unfortunately, some folks just don’t see it that way.  My supporters and I have to sit back and watch as these bottles are ridiculously flipped for unwarranted premiums.  Some even using pictures of Eddie Russell to help “faux-endorse” the solicitation.  It’s a hard and embarrassing thing to witness and I hope that today’s post makes a difference.  It likely won’t, but I feel I have to try.  While I haven’t remained altogether silent on this issue (I’ve posted brief comments on Reddit and Instagram), I feel a dedicated blog post is unfortunately necessary.

And that brings me back to my introduction.  I’d like to think that my blog appeals to both informed and uninformed consumers of Wild Turkey.  Those that don’t care, well they likely buy handles of 101 every other week and aren’t concerned with my wordy ramblings.  I’m totally fine with that.  In so many ways that’s Wild Turkey’s base consumer.  I respect their brand loyalty wholeheartedly.  But for those that really want to dig deep, it’s time to find out the truth about “One & A Century.”

For those unaware, One & A Century is a Russell’s Reserve Single Barrel private selection in which I participated.  The barrel was chosen by me, Adam Howard of Lexington Beverage Outlet, and Eddie Russell back in September of this year.  It was a special day and I have incredibly fond memories of it.  It was also important to me personally, as my father was in attendance.  Wild Turkey has always centered around family.  Having my dad at the tasting gave it that perfect touch.  As for the barrel we selected, let’s just say we went for something different (thank you Adam and Eddie).

Even before the day of the selection I knew what the theme of the bottle would be.  There wasn’t a 101st anniversary release this year and I thought I could do something about it.  Even if it were only a small gesture, I could do something.  Thankfully, I have friends and supporters with an equal passion for Wild Turkey.  Take for example Bryant, who suggested a CGF theme.  And Ryan, who turned my awful cartoonish mock-up into a beautiful work of art.  And finally Ben, who claims he “only printed it.”  Well, Ben knocked it out of the park.  You all did. 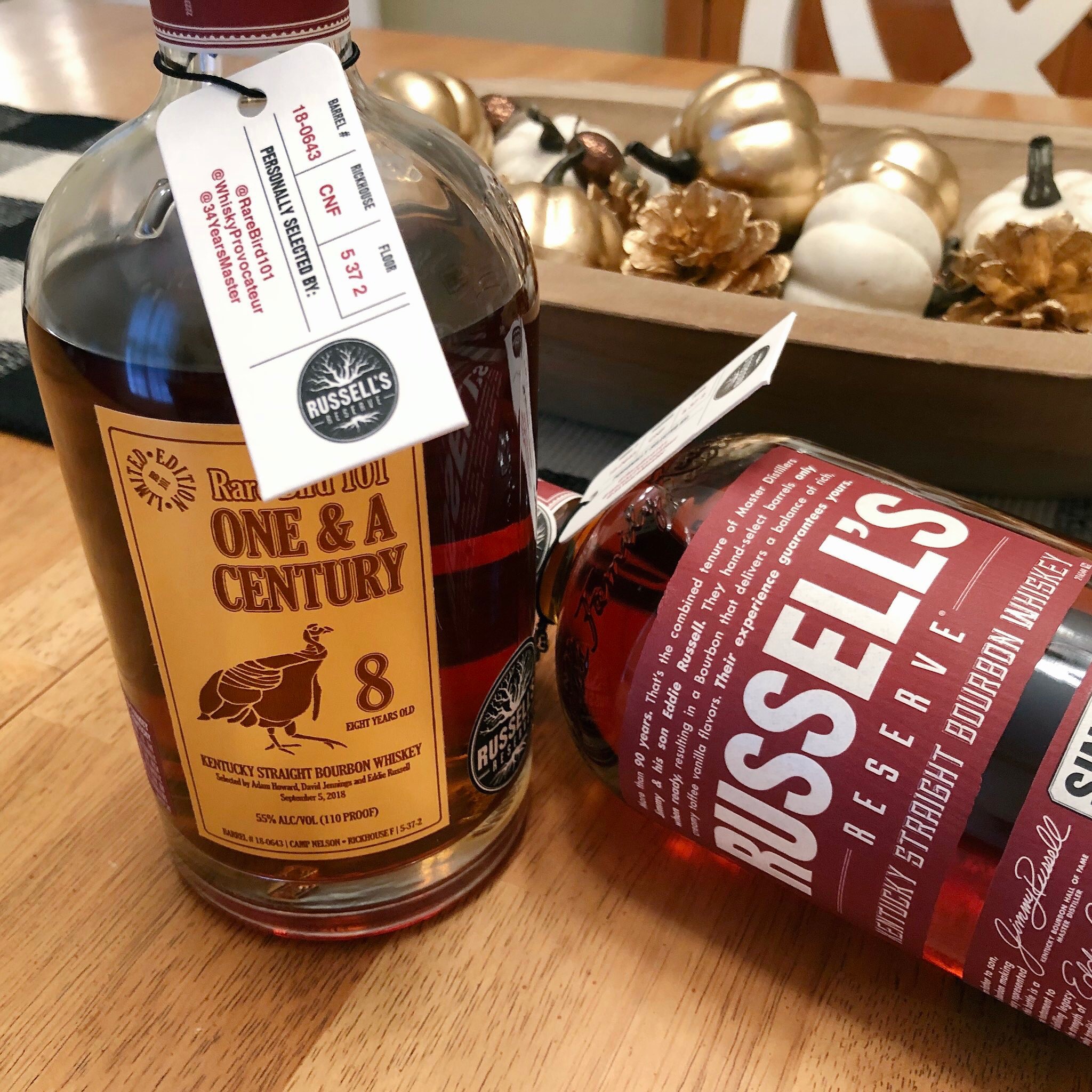 So with a barrel chosen and a sharp custom label, it was quickly decided that these bottles would be sold at market retail price.  Thank you Adam for being so firm with that decision.  While most bottles were reserved for patrons, there were a few cases available to the general public this past Wednesday.  We thought they’d last a few days – maybe even a week or two.  Surprisingly, they sold in a matter of hours.  At that time, I could only hope that true Wild Turkey fans purchased the bottles (damn naivety again).

But things are rarely that simple.

Let me make this crystal clear:  One & A Century is a $60 bottle.  I’m not entirely sure I’m the best one to convince everyone of that.  Hell, I helped pick it.  My name’s on it.  One could think I’m merely offering lip service or trying some odd reverse psychology Jedi mind trick to give this particular selection allure.  I’m not, but you don’t have to take my word for it.

Long before One & A Century was bottled I’d asked Joshua Hatton of the Jewish Whisky Company if by chance he’d guest review it.  I was thrilled when he agreed.  I’ve always found Joshua’s tasting notes enlightening.  I don’t always agree with his interpretation of notes, but more often than not I find striking common ground.  I also appreciate his detailed descriptors that really “drill in,” as well as his signature way of sharing sensory experiences on paper (you’ll see).

I’m proud, humbled, and honored to present Joshua’s thoughts – uncut and uncensored.  This is One & A Century through his eyes (nose and palate). Thank you, Mr. Hatton.

One & A Century, by Joshua Hatton

Having run one myself since 2007 (or so), and it now being all but defunct, I’d say that I’ve generally grown numb to nearly all whisky reviews/opinion pieces.

That said, I currently read four whisky blogs and one sherry blog:  WhiskyFun.com, WhiskyNotes.be, SpiritedMatters.com, RareBird101.com, and SherryNotes.com, respectively.  The first one and the last two are the three I read with any sort of regularity.

To say that what David does for the Wild Turkey enthusiast community is nothing short of fantastic is, well, not an understatement, just an accurate one.  I enjoy David’s posts for his passion, honesty, and his occasional historical pieces as well.  He’s also pretty damn generous.  When it comes to handing out samples, he takes “sharing is caring” to a whole new level.

While I’ve not yet met David, I get the feeling that he’s simply a good person.  Someone who gives a shit.  We need more folks like that.

When David told me about his 8-year Wild Turkey pick and his vision for his personalized label, honoring 101 years between the two Russells, I was struck by his thoughtfulness.  Plus the 101st anniversary box project he rallied for Jimmy and Eddie?  So. Freaking. Thoughtful.

When I heard that Wild Turkey themselves didn’t have anything planned for the 101st combined anniversary I was both surprised, and at the very least, relieved to know that someone was doing something to honor such an achievement/occasion.

So, the matter at hand – a short while back David reached out to me asking if I would write tasting notes on his Wild Turkey barrel pick for RareBird101.  Not only was I surprised to have been asked, I was also honored and happy to do it.

It’s been a while since I’ve written tasting notes for other people’s whiskies, but here we go anyway!  I hope you enjoy these notes as much as I’m enjoying this very unique pick.

On the nose:  An odd nose, to be sure!  Fruity at first, but this quickly goes away (seemingly never to return) to make room for a more industrial quality.  Think window putty, cardboard boxes (damp, yet fresh and not dank at all), and leather work gloves.  For 55% ABV, this doesn’t burn the nostrils at all.

I did say this was an odd one, right?  This may be a first for me but there’s a hint of olive brine.  Fascinating.

The underlying tones of warm malt and a delicate nuttiness are inescapable and present a really nice backbone for all these ancillary notes to glom onto.  Before I go on to taste this, I think it’s important to point out the slight menthol/minty note on this one.  It’s a note I search for and often find in short casks.

Back to the nose, after a few sips and I’m presented with chamomile tea and honey.  The nose really evolves, which is great.

On the palate:  Um, wow, now we’re talking.  The initial sip, at first, just presented me with mouthfeel (big, rich, and oily, nearing on waxy) – not huge flavor initially, but like a pinball machine pull having been pulled all the way back to launch the pinball into the machine, the flavors launch themselves across the tongue.  The spice is huge on this one.  The rye in the mash bill owns the palate here but it relents enough to present notes of salted caramel, red bean ice cream, hints of carrot cake, or better yet, Gajar Ka Halwa, too.  There’s a slight plasticine note here as well, which just adds to the uniqueness.  The vanilla tootsie roll note is not to be ignored.

Finish:  The flavors come back in waves – vanilla, cinnamon spice, echoes of shredded and spiced, yet sweetened carrot, and lasting spice.

In summary:  A really well-chosen cask of whisky right here!  I love that there are flavors here that are outside of the traditional bourbon-box.  The flavors all develop quite nicely.  I would not, however, say this is an easy sipper (which is fine with me).  There are plenty of easy sipping whiskies out there, especially in the bourbon world; so much is just so easy/so good.  This one, instead, makes you pay attention.  It doesn’t ask you kindly, it demands your attention.  Well done, DJ.

Closing Thoughts:  I can’t say thank you enough, Joshua.  Your words are far too kind and gracious, and your notes … I swear I could hear Raul Julia’s Gomez Addams reciting them with all the flair and sophistication of an eccentric whiskey savant.  On guard!

And now, my readers, you’ve had an outsider’s glimpse into this selection.  Do you think “window putty” and “leather work gloves” sound appealing?  $400 appealing?  I’m highlighting these notes as an extreme, of course.  But let’s be brutally honest – Joshua is right.  This bottle isn’t traditional.  It’s not for everyone.  If you think off-profile uniqueness and a gold foil sticker make it worth hundreds of dollars, you couldn’t be more mistaken.

Please don’t pay hundreds of dollars for a Russell’s Reserve Single Barrel private selection.  In fact, please (kindly) inform anyone selling Russell’s picks for triple digits (outside of legitimate charitable causes) that they’re doing a disservice to this hobby.  Every single barrel in the state of Kentucky has unique properties.  Most will be good, some will be exemplary, but not a damn one of them will change your life.  Stay mindful, stay careful, and most importantly, stay informed. – David J.

20 thoughts on “Honest Thoughts: One & A Century”