And that’s the situation I found myself in a few months back when Kentucky Supply & Demand (KS&D), a private bourbon group, received their bottles from an April 2018 Wild Turkey barrel tasting.  Two barrels had been chosen, one from rickhouse B and the other from rickhouse H.  Both are undeniably reputable rickhouses – each with plenty of quality barrels rolled out over this past year.  But hey, I’m a sucker for rickhouse B.  I just love the rich and intense bakery notes it so often imparts.  And so B it was.

So what makes rickhouse B special?  Well, for starters it’s a considerably old building (circa 1890’s) – the second oldest rickhouse at Wild Turkey.  It’s also situated in a manner that promotes ideal maturation.  How so?  Well, Brand Ambassador Bruce Russell recently appeared on the Dads Drinking Bourbon podcast (an excellent and highly recommended episode, by the way) and had some informative things to say about rickhouse B (his personal favorite).  According to Bruce:

None of our other warehouses age juice quite like [rickhouse B].  It’s one of those with A that was built in the 1890’s.  Built different – built kind of unsafe because it’s right next to the buildings around it. […]  But because of that, there’s nice wind tunnels that come in between those buildings that keep those rickhouses drier and airier.  It makes for really good whiskey.

But just because some folks find rickhouse B a favorite, doesn’t mean everyone will.  That’s one of the many beautiful things about Wild Turkey single barrels.  Each rickhouse – each floor of each rickhouse adds its signature touch to every barrel racked. 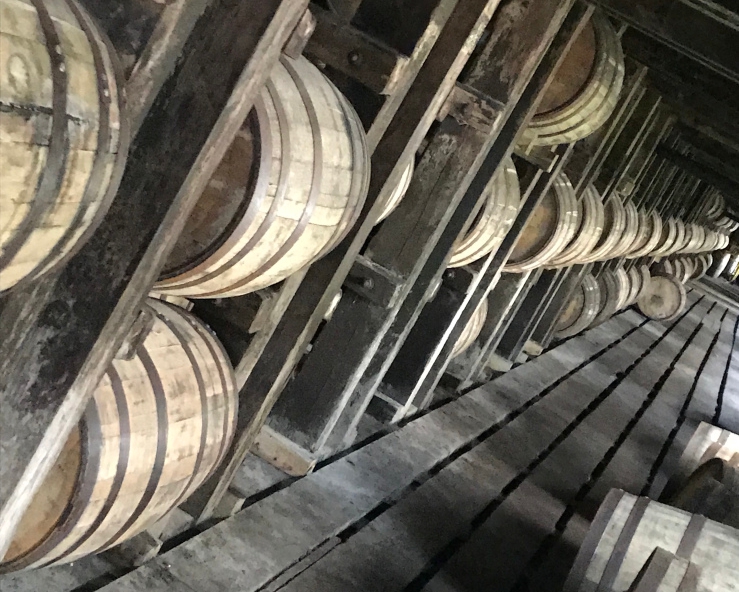 Not too long ago I was asked by a subscriber to describe each Wild Turkey rickhouse and how I’d sum up their respective profiles.  Not an easy task, but when you’re sitting in a doctor’s office waiting room watching the hands of the wall clock move (seemingly backwards at times), typing an email on your iPhone with your uncoordinated thumbs is comparatively a damn good time. 🙂

Here’s what I came up with on the fly.  It’s far from all-inclusive, nor does it break down profile by floor (so consider these mid-floor descriptors), but it covers many of the popular rickhouses you’ll typically find on Russell’s Reserve Single Barrel private selection neck tags.

Well, I think that covers the nerdy stuff.  It’s time to find out if Fight Me stands toe to toe with previously reviewed rickhouse B selections and the familiar bakery-forward profile I’m expecting.

Overall:  While not immensely diverse notewise, Fight Me is an incredibly delicious pour in nearly every capacity – nose, taste, and finish.  Its complexity lies in its depth and intensity, with (even more than the expected) thick and robust rickhouse B bakery notes.  I’ve had several selections comparable in quality to Fight Me.  Beast Masters’ “That Old Kentucky Chew” #17-114, which I reviewed this past summer, immediately comes to mind.

A pour like Fight Me is one of those that you never regret picking up.  Occasionally, I’ve pulled the trigger on a Russell’s Reserve Single Barrel selection only to end up feeling that I would’ve been just as happy with a non-select retail bottle.  It doesn’t happen often (and isn’t necessarily a bad thing), but when it does it’s somewhat of a disappointment. After all, I want variety in my single-barrel whiskeys.  That doesn’t necessarily mean a selection has to be “off profile.”  It just means that I’d prefer each bottle to add something new or different to my overall sipping rotation.

At the end of the bout, Fight Me is a pound-for-pound Russell’s Rumbler – a heavyweight Bourbon Brawler – a Kentucky Stallion.  As each round’s gone by I’ve remained consistently impressed with its hardy, yet entirely approachable profile.  Sure there’s more complex bourbons out there, but few with this level of depth in flavor at 110 proof.  Fight Me excels at the fundamentals and comes out swinging with heart.  A TKO by any bourbon standard.  Cheers!